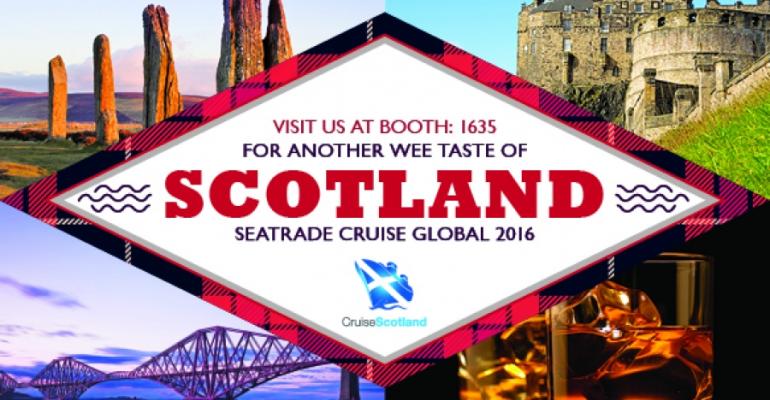 Cruise passengers arriving in Scotland this year are set to top over 500,000 for the first time following another record-breaking season in 2015 when 460,546 visitors sailed into ports around the country.

Numbers increased for the sixth successive year – by 14.8% on 2014 – while cruise ship visits rose 9.6% to 501 calls, generating an estimated £54.6m for the Scottish economy through passenger spend alone, up by around £5.5m on the previous year.

A number of ports recorded their best cruise seasons yet in 2015, with Greenock Ocean Terminal the first Scottish port to welcome over 100,000 passengers in a season, at 108,866, and Kirkwall exceeding previous records, with 81,401 passengers.

The ongoing trend towards larger vessels is set to see records continue to tumble at a number of ports in 2016, when 644 vessels are expected.

Victor Sandison, chairman of marketing association, Cruise Scotland, said: 'The continuing growth shows the increasing popularity of Scotland as a destination in a highly-competitive global market. This year’s estimated passenger count of over 525,000 will take us around halfway to the annual target of 1.1m by 2029 – a figure identified in a study carried out in 2010 when there were just over 268,000 cruise visitors.'

Viking Ocean Cruises will visit Scotland for the first time in 2016, with Viking Sea and Viking Star due to call at Kirkwall, Lerwick and Rosyth, and a first-time round-Britain voyage by Disney Cruise Line will see multiple calls by Disney Magic, including Greenock, Kirkwall and Invergordon.