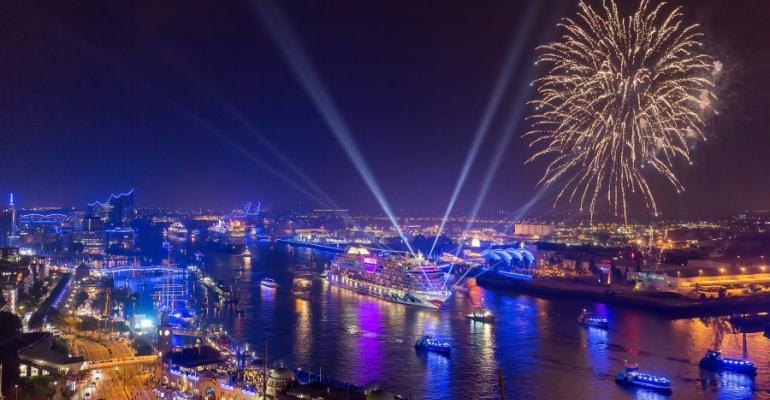 From the 'Blue Port' of Hamburg - a fireworks send-off for each ship and a personalized laser message (Photo: CHLietzmann)
Hundreds of thousands of visitors flocked to Hamburg Cruise Days, capping a 10-day stretch of public and industry events that included Seatrade Europe, Cruise Lines International Association's Port & Destinations Summit and the fvw CruiseLive congress, a travel trade and consumer congress that provided extensive information on ships, offers and packages.

The city of Hamburg made a strategic decision to combine the events under the motto 'Hamburg welcomes you on board' to further promote and strengthen Hamburg's attractiveness and importance to international cruising.

Hundreds of thousands of visitors gathered on the banks of the Elbe River Saturday night for the Hamburg Cruise Days Parade as AIDAbella, Mein Schiff 4 and Europa sailed out. They were bathed in blue light as part of the Blue Port Hamburg Project by artist Michael Batz, and were escorted by barges, sailing vessels and passenger ships. Each vessel was sent off with its own fireworks display and a personalized laser message.

The evening showed why Hamburg is a top European cruise destination, according to Thorstein Kausch, md of the Hamburg Convention Bureau.

'The people of Hamburg have an unrivaled passion and enthusiasm for cruises, and the city will once again be broadcasting amazing images from the event all over the world,' he added.

Some 570,000 visitors were projected over the weekend.

Along the event boulevard, which stretched for more than four kilometers between Cruise Center Altona and HafenCity, locals and visitors took part in the festival, where 15 Theme Islands invited people to browse the world of cruises.

Costa neoRomantica and Amadea, the new 'dream ship' from the German television series, visited on Friday. Saturday's ships were Mein Schiff 4, Europa and AIDAbella. Queen Mary 2 and MSC Splendida were alongside Sunday, with their departure capping the end of Hamburg Cruise Days.

The 2015 edition of Seatrade Europe, which took at Hamburg Messe September 9-11, was attended by almost 5,000 participants from all over the world (an increase on the previous event held in 2013), including over 250 exhibitors from 50 nations. ‘The industry is still powering ahead for growth. That was clearly evident at Seatrade Europe. And the substantial increase in exhibition visitors and conference delegates reflects the growing interest in the cruise sector,’ said Bernd Aufderheide, president and ceo, Hamburg Messe und Congress GmbH.