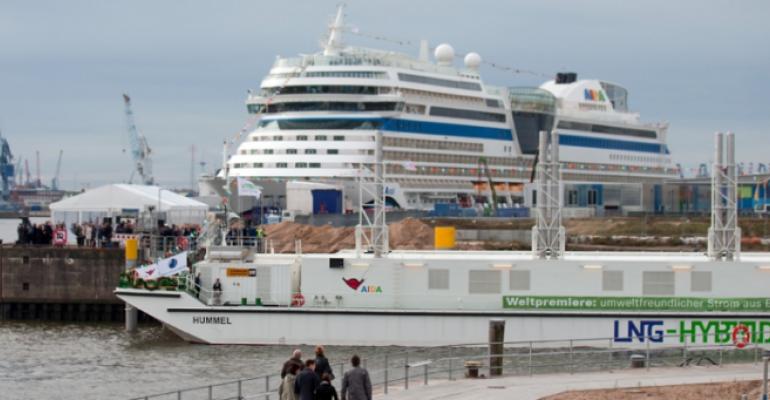 During AIDAsol's next call, on June 9, the ship for the first time will be supplied with LNG-generated 'shore' power for its entire call.

AIDA Cruises president Michael Ungerer described the new system as a globally unique pilot project, adding it had opened a new chapter of environmental protection in the Port of Hamburg. LNG eliminates the emission of sulfur oxides and soot particles in connection with supplying AIDAsol's electrical power needs in port. Nitrogen oxide emissions are reduced by up to 80% and carbon dioxide emissions by 30%.

The 76.7-metre barge Hummel contains five gas engines with a total output of 7.5 megawatts. The barge arrived in Hamburg last autumn for an extensive preparation and testing period before operation.

In May its operator, Becker Marine Systems, received the 2015 GreenTec Award sponsored by the German Travel Association, DRV, in recognition of this innovative project.

In spring 2016 AIDA Cruises will start operating the new AIDAprima from Hamburg. The ship is equipped to receive external power from the barge Hummel, but has also dual fuel engines that can be operated directly with LNG.

The inauguration of its new flagship will take AIDA another step forward in environmental protection and make it a cruise industry pioneer.