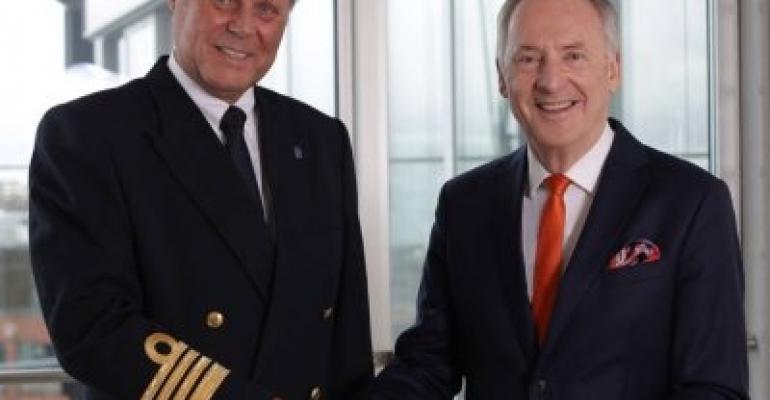 Taking over his new command in Dubai later this week at the beginning of a cruise bound for Piraeus, Dvergastein will be alternating with Europa's longstanding captain, Olaf Hartmann.

Dvergastein has vast expertise in the upper-tier cruise sector. He worked for Seabourn since 2010. Before that, he had a long spell with Radisson/Regent Seven Seas Cruises after joining Seven Seas Cruises in the early 1990s, where he was strongly associated with Song of Flower.

His passenger shipping career started in 1984 when he was appointed chief officer for the newly built Sea Goddess I. In 1987, Dvergastein was named captain.

In addition to his broad experience as a master in the luxury segment, he also has been in charge of supervising and inaugurating two cruise newbuilds.

Dvergastein's family has roots in shipping dating back to the 15th century. His father and grandfather were captains, too. The Dvergastein family is based in Nevlunghavn, near Larvik in southern Norway.

For Hapag-Lloyd Cruises, Dvergastein's appointment is novel since he has not grown through the company's ranks, as has been the case for most of the company's masters. As a Norwegian, he also adds an international note to the group of Hapag-Lloyd captains, who have mainly been Germans and Swiss.

Hapag-Lloyd Cruises Chairman Karl J. Pojer called Dvergastein an extremely experienced master as well as a passionate, distinguished host. 'He knows the requirements of our guests in the luxury segment and will, jointly with his colleague Captain Hartmann, enrich the special atmosphere of the Europa,' Pojer said.

Dvergastein's appointment comes a few months before Europa's modernization, planned during a two-week docking in October. Dining choices will be broadened with two new offers, The Globe by Kevin Fehling and the Pearls. Tables for two in the central Europa Restaurant will be doubled to provide more flexibility.

A new fitness and well-being concept branded as 'Europa Refresh' is going to be implemented.

Itineraries, destinations and cruise themes will be broadened, as well. Twelve maiden calls are scheduled for the 2020/21 season, and new themes like a 'Musicwaves' cruise will be added. Coincidentally, the destination will be Norway—the home country of Europa's new captain.