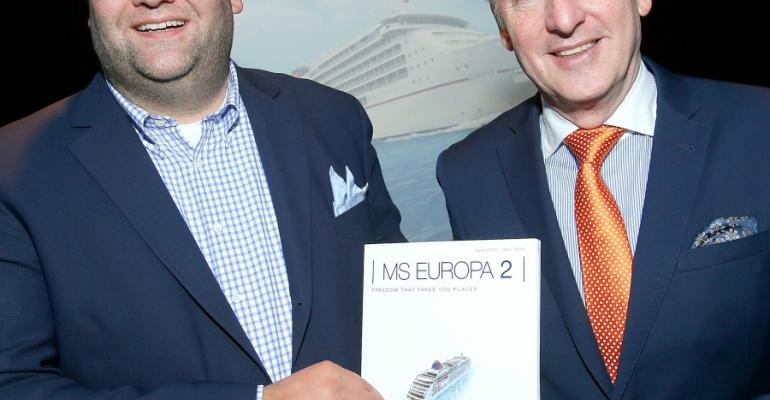 Accompanied by Julian Pfitzner, Europa 2’s director of product management, the pair spoke of the importance of the UK as an international source market for the line.

‘I am delighted to be in London and celebrate Europa 2’s first birthday. The UK has proved to be an important market for us and we are pleased to see a growing number of British guests,’ remarked the head of the Hamburg-based operator.

Pojer revealed H-L Cruises increased its international guest base by 42% between 2013 and June 2014, mainly targeting the UK, US, The Netherlands, Belgium, Australia and Scandinavia.

When introduced in May last year, H-L Cruises decided to use Europa 2 to market to a cosmopolitan target group in the above mentioned countries, in addition to with its traditional German-speaking client base sourced from Germany, Austria and Switzerland.

Currently international guests account for just 5% of all those cruising on Europa 2, but Pojer is looking to grow that to 15% within the next three years and he sees the UK accounting for half of that growth.

UK-based sales manager, Mike Flanagan works with 25 active UK sales partners including The Cruise Line and The Cruise People and they have welcomed 100 UK travel agents onboard Europa 2 to date. ‘You have to experience this ship to understand what we are providing as a new concept in casual luxury cruising,’ he explained.

With up to 500 guests and all balcony-suites, Europa 2 claims to provide the greatest space per passengers in the cruise industry at 83%, compared to 70.4% on Europa.

Unlike Europa, all cruises on the newest ship are international, with English and German as the onboard language. All printed information, announcements, and shorex are offered in English and the entertainment programme does not rely on language.

‘The homogenic balance of clients onboard is so important,’ commented Pojer, ‘then language doesn’t become a barrier’, said the Austrian who brings vast experience in the hospitality and tourism sectors to the line, having held senior positions in leading hotel groups before joining TUI AG in 1996. Prior to taking up the helm at Hapag-Lloyd Cruises, he spent 10 years in director roles at TUI Hotels & Resorts and was also on the advisory committee when TUI Cruises was launched.

The line has just launched its third English language brochure for Europa 2 sailings between April 2015 to April 2016, and featuring south-eastern Africa for the first time, combination seven day options in the Med to make a 14 day cruise and a variety of cruise durations including Scandinavia, Western Europe, the Arabian Gulf, India, Vietnam and Hong Kong. In the coming year, Europa 2 will visit Riga, Port Grimaud(for St Tropez) and Piran for the first time.

On the expedition front, it will operate 11 international cruises on Hanseatic between January 2105 and May 2016 to the Artic and Antarctic, Chile and Amazon.