Happy days for Norway but green legislation could be a spoiler 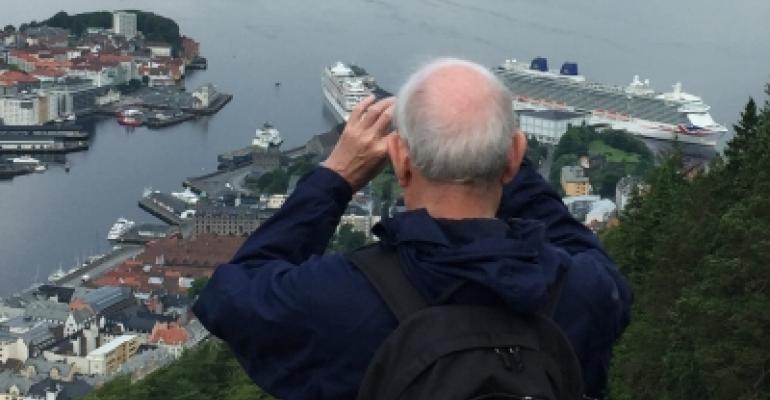 View of Bergen from Mt Ulriken
Facing another year of double digit growth in calls and passengers it was not surprising to find representatives from 27 Cruise Norway ports, destinations and attractions in good spirits during their annual visit to London to meet with European cruise lines and media.

56% of cruise passengers visiting Norway last year hailed from the UK(24%) and Germany(32%) with the US accounting for 12%, he shared.

Norway is now a year round port with calls every month although June, July and August remain the peak months, ‘so plenty of capacity to build on,’ he said.

‘Cruise tourism is growing faster than the rest of tourism in Norway and we find ourselves under constant scrutiny in local, regional and national level as well as in the media,’ Tangeras told Seatrade Cruise News.

New regulations apply for ships in Norway’s World Heritage Fjords including Flam and Geiranger, from March 1, 2019 and compliance with IMO’s Tier I takes effect start of next year. The government has also issued draft regulations on zero emissions in the World Heritage Fjords from 2026 although talking to various ports there are a lot of unanswered questions related to the proposed regs.

Zero emissions legislation on the table

‘If the 2026 zero emissions regs are set in stone it may lead to the best becoming the enemy of good,’ commented Rita Berstad, port director (Stranda) at Geirangerfjord Cruise Port.

‘Tourism is essential for a vibrant local community just think of the ripple effects that cruise tourism brings to the providers and sellers of local produce: if the zero emission becomes law it will have serious implications on communities both in the short and long term,’ she added.

Following 3 minute presentations by the 27 members, cruise line execs and media were encouraged, via a quiz cleverly crafted by Flam’s Jon Olav Stedje, to visit each of the ports at their pop ups to find out latest news and views.

Seatrade Cruise News picked up the following news from the north: Svalbard is building a new permanent tourist information centre which will open in June; Pullmantur will be returning to do turnarounds at Lakselv in 2020 which operates a SeaWalk; Hammerfest has a new Polar Bear March for arriving passengers with locals dressed in costumes accompanying them on the 2km walk from the ship’s quay to the city centre; Narvik is getting a new town centre cruise pier opening on October 15 with the call of Queen Elizabeth; Tromso has a newly renovated cable car with extra capacity and new viewing platform over the city; Harstad has launched a very cool website with interactive info on port facilities, viewpoints, shorex providing 360 degree views of all touch points for lines to plan their next visit; Lofoten is offer glamping dinners; at Bodo the new Jekt Trade Museum with replica fishing boat will open this summer and at Bronnoysund flowers, flags, locals in national costume and a blue carpet await arriving passengers.

Close to Kristiansund, two new island destinations of Smola and Histra for smaller and expedition ships are being promoted for nature and outdoor experiences; in Molde, the town centre is being renovated with new broadwalk and town square; Alesund is hoping to provide shore power in 2021; a new panoramic tour from Geiranger by gondola to Mt Stranda provides great views of the fjord; Nordfjordeid inaugurated a SeaWalk last week with a call be AIDAperla, new attraction is SAGASTAD museum with a 30mtr long replica of the Myklebust Viking ship; new NoK12m investment at OldenLoen saw the opening this week of Olden Cruise Park close to 4/5 tender quay with area for crew, buses and sandy beach and at the end of Norway’s longest fjord, Skjolden has 12 calls this year so plenty of capacity to explore Jotunheimen National Park and Nigardsbreen Glacier in Jostedalsbreen and the oldest stave church at Urnes.

In Bergen, Ulriken 643 cable car goes to the top of the highest of the city’s seven mountains and is one of the most popular attractions. A new cable car is being built which will increase the capacity of each car from 15 people to 50. A new 200 seater restaurant at the top will open next year; Walk behind 182mtr high Voringsflossen Waterfall 20km from Eidfjord; at year round cruise port of Stavanger upgrades of two berths have been approved and planning applied for a new long cruise berth plus planning for LNG bunkering is underway; Kristiansand became Norway’s first port to provide shore power for cruise ships last year; Arendal confirms it will only ever take one cruise ship a day; in Telemark a third new berthing option for small ships of up to 90mtr is being offered at Langesund and in the Olso region, LNG ship to ship bunkering supplied by Skangas is available for cruise ships visiting Frederikstad.