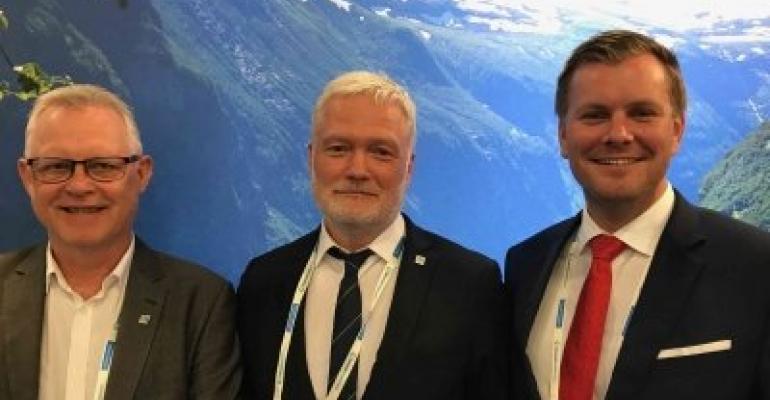 Haugesund cruise trio of L-R: Leiv Leknes, Vigleik Dueland and Tore Gautesen pictured at Seatrade Cruise Global 2019 PHOTO: Mary Bond
Haugesund in Norway is a prime example of a new to cruise port and destination that has tried from the outset to manage sustainable growth and ensure that both the port and surrounding tourist infrastructure has kept pace with the rising numbers of cruise guests visiting year-on-year.

Located on the southern banks of the entrance to Hardangerfjord, Haugesund joined the cruise map in 2013 when Fred Olsen became the first line to send a ship.

‘We started welcoming smaller ships from the likes of Fred Olsen and Saga and now we have 316mtr long MSC Meraviglia as a caller at the port,’ Vigleik Dueland, director of tourism and cruise development at Destination Haugesund told Seatrade Cruise News.

Along the journey so far, the port has invested in adding four 150 ton bollards for better handling of larger ships, navigation aids for safer and improved access, a terminal with information desk, free WiFi for crew and resurfacing the quayside.

The port has ambitions to grow and has pencilled a second cruise berth and terminal in the next ten year plan. ‘We will study this at the end of 2019 and decide,’ said Tore Gautesen, CEO of the port of Haugesund (Karmsund Port Authority).

But it not only about enticing more ships we want to offer a good shorex experience also so are always on the look out for new attractions, said Dueland.

He confirms the local community have embraced cruise and really enjoy both the business opportunities it brings and the revenues. ‘Many are smaller companies and were not earning much money before the cruise ships came.’

Eljavik Farm investing for the future

He cited family-run Eljavik Farm which welcomes cruise guests on organised shorex including homemade lunches. ‘The owner Nina served 10,000 lunches last year and is looking to grow her offering and is investing back some of what she has earned from cruise tourism to create a sustainable future for her family.’

The farm overlooks Langfoss Waterfall so she is building a new visitor centre and sightseeing platform (from natural wood) opening next year at a NKr20m investment. This will allow the farm to welcome more visitors by increasing the venue options for people management.

Another success story, cited by Dueland, is Akrafjoren sightseeing which offers fjord cruises to Langfoss. It started with a vessel carrying up to 50 passengers, increased the capacity to a boat carrying 100 and now operates a 180 passenger capacity vessel.

Back at the port, Leiv Leknes, the port’s CCO said shore power is under review. ‘We will make a decision by the end of this year and if given the go ahead by the board, we would be able to offer cruise ships clean shore power at berth by 2022.’

The port’s container terminal opened four shore power installations a few months back and there is no reason why we can’t extend that operation to the cruise berth, Gautesen added.