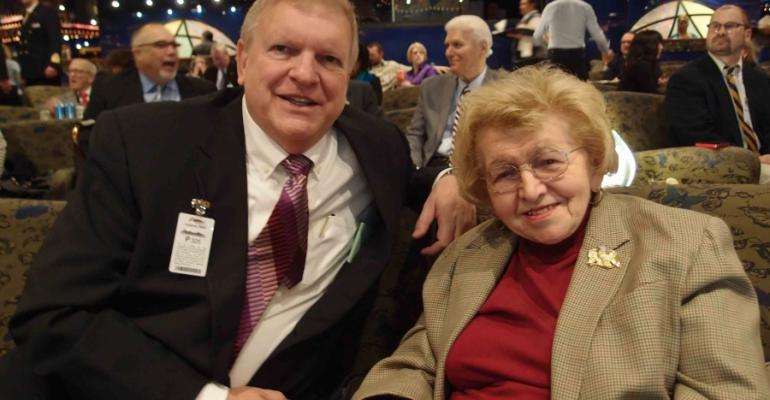 At a reception on board she was seated with Maryland Transportation Secretary Peter Rahn and traded quips with Carnival brand ambassador John Heald, who ended up getting her autograph.

In 2006 the port was named after Bentley, a former US congresswoman from Maryland, past Federal Maritime Commission chair, port advocate and strong ally of US industry and the merchant marine. While chairing the FMC during the Nixon administration, she was one of the US government's highest ranking women and the first woman to serve in a key governmental position in the maritime field.

Bentley began her career as a reporter and then maritime editor at The Baltimore Sun.

She remains active as a consultant for the Port of Baltimore. Still feisty at 91, Bentley told Seatrade Insider she gets involved in 'the tough deals' when her legendary talent for finding solutions is needed.

'I do anything that needs to be done,' she said.

Bentley hailed Carnival Pride's return to year-round service from Baltimore and called Carnival Cruise Line a 'major contributor' to the port and the state of Maryland over years.

'Cruising is important and obviously, the way it's taking up all over the world. Even less developed countries are emphasizing its importance. People want that opportunity,' Bentley said.

'The only thing missing is some American-flag ship,' she continued. A champion of the US maritime industry, Bentley had worked with the World City group for a long time as a consultant.

She said she welcomes Viking River Cruises' plan to get into the US river arena: 'There are some small shipyards in the US that can build those [river vessels] and they need the work.'

Apart from advocating for the port and the US maritime sector, Bentley told Seatrade Insider there are two things on her bucket list: a Danube River cruise and a New Year's Eve in Vienna.