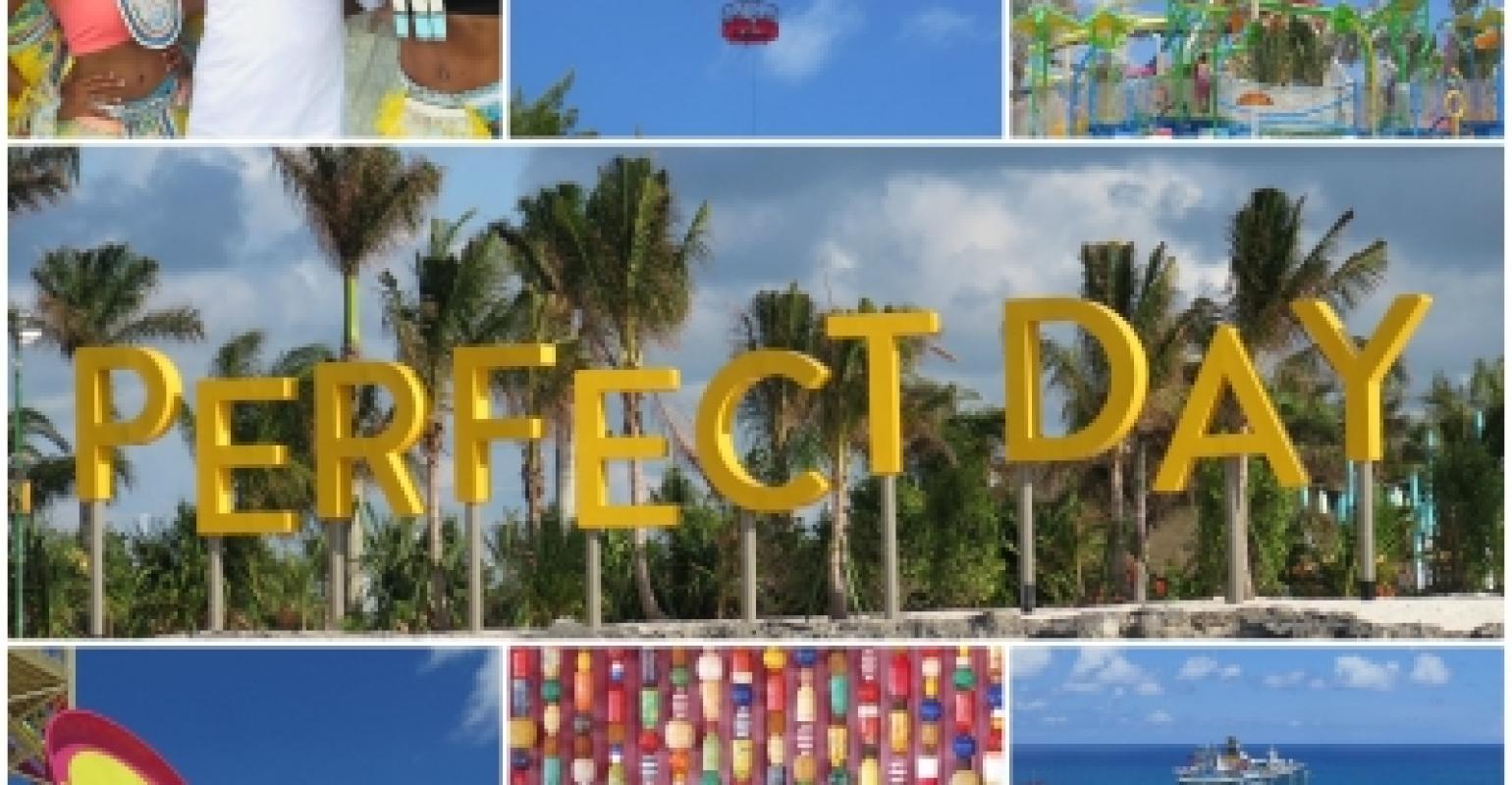 Top row, from left: Mark Tamis with friends; Up, Up and Away, Daredevil's Tower. Bottom, from left, the slingshot, live music at Captain Jack's, view from the helium balloon PHOTOS: Anne Kalosh

A hit at CocoCay, Royal Caribbean's Perfect Day concept will be expanding soon

To appreciate the importance of Perfect Day at CocoCay, consider that in 2020, more than 2m passengers will visit, or about half of the nearly 5m travelers who will sail with the Royal Caribbean brand.

The $250m project has been one of the largest non-shipbuilding capital investments in Royal Caribbean's history.

The expanded Phase 2 of CocoCay, which could enable three ships and 12,000 visitors a day — as recently presaged by Royal Caribbean International President and CEO Michael Bayley — could be ready as soon as 2020, according to Mark Tamis, SVP hotel operations, who oversees the Perfect Day concept.

And there are other ways the island's use could be expanded or its capacity utilization spread out, Tamis told Seatrade Cruise News. Possibilities include longer calls, such as lingering through the evening, instead of the normal 4:30 p.m. departure, or until 10 or 11 p.m. or even overnight. Ships could arrive in the afternoon and stay late or overnight, with music concerts activating the night calls.

Or ships could stop twice on a cruise, perhaps at different times for a different experience.

And vessels increasingly will sail in from homeports beyond Florida, such as Enchantment of the Seasfrom Galveston and, in 2020, Oasis of the Seas from Cape Liberty. Next year Perfect Day at CocoCay will be welcoming 15 ships on cruises from as far away as Barcelona (Allure and Rhapsody of the Seas' trans-Atlantic repositionings in November).

More than a year ago, Royal Caribbean disclosed the Perfect Day collection would span five places — spreading to Labadee in the Caribbean and to Asia and Australia. Among them, new destinations will be created, and all the five Perfect Day experiences are expected to be activated over the next five years, Tamis said. Their features will vary depending on the destination and the local source market's idea of thrills and chill. For example, in the South Pacific, a thrill might be snorkeling-related.

The company will be talking about its further Perfect Day plans 'soon.'

Meanwhile, deploying ships that have undergone the 'Royal Amplified' amp-ups to CocoCay is proving hugely successful. Older tonnage is typically relegated to short itineraries, but Royal Caribbean was banking on wowing people new to cruising who typically book short getaways.

According to Tamis, the guest satisfaction scores have been 'record-setting.' They went up for the Royal Amplified ships, then by deploying those to CocoCay, 'the boost was almost mind-blowing,' as he put it.

Over the weekend, the 2002-built Navigator of the Seas — which emerged from its $115m Royal Amplified update earlier this year — visited CocoCay as part of its three-/four-night Bahamas program from PortMiami.

The ship carries about 4,000 passengers, and on Saturday the 120-acre CocoCay easily handled everyone who tried out features like the 21 waterslides, including the tallest in North America, floating up in a tethered helium balloon to the highest point in The Bahamas and conquering the Caribbean's largest wave pool and largest freshwater pool. There are currently 54 cabanas, with The Bahamas' first over-water cabanas to open in December.

During the years of planning, Royal Caribbean's 'north star' was a perfect day; the project name was ultimately selected as the actual name. Not only does it convey what the cruise line aimed to provide, it set a high bar for everyone involved in the design and execution.

'It's honestly held us to a much higher standard, and it helped on the contractor side,' said Claudia Diaz-Gonzalez, Royal Caribbean's director of private destination development.

Having had more than a thousand workers on the island, Royal Caribbean created a culture where they began self-assessing if the job they'd done was perfect.

Tamis described a great cooperation with The Bahamas government, which was keen to create jobs. Some 357 Bahamians have been hired to live and work on CocoCay, and local contractors were used.

Constructing the pier was critical for success since wind has led to some missed calls over the years because tenders couldn't operate.

Tamis said the biggest construction challenge was building in a remote location. Some 1,500 containers were shipped to the island. Perfect Day's structures, including the iconic Daredevil's Tower, were designed, built and tested to withstand a Category 5 hurricane. The tower has 207 steps. Riders are shielded from the wind and sun but get amazing views on the way up.

Safety, security and environmental sustainability were fundamental. The company hired an environmental officer who lives full time on CocoCay, and elements range from solar-powered trams to biodegradable cutlery and glasses that create new soil for landscaping, food waste incinerated into ash used for fertilizer, all recyclables loaded back onto the ship, and much more. The Bahamas Environment, Science & Technology Commission (BEST) gave its blessing to the project.

Balancing the thrills and chill

Balancing the chill and thrills underlied 'everything we did here,' Tamis said. 'If you want to chill out all day and read a book on what feels like your private beach, you can do that, or spend all day riding the tallest waterslide in the Caribbean, or both.'

And, Diaz-Gonzalez emphasized: 'We've been maniacal about the details.'

Royal Caribbean started by listening to what guests want, and team members across various disciplines visited more than 30 water parks around the world for ideas. Scientific studies were garnered to plan the visitor flow and ensure adequate space per person. The cruise line kept pushing the limit, going for the ultimate — for example, Daredevil's Tower ended up taller than first conceived. Fifteen groups worked on its design and construction.

A waterslide like the slingshot is found in other parks, but Royal Caribbean tweaked it to be even more exciting. At the heart of CocoCay, the Oasis Lagoon with swim-up bar one of the most popular spots. It is massive — filled with 800,000 gallons of water — yet designed with many little coves to create intimate areas. The white sand beaches remain idyllic as they were before, with calm shallows for wading and abundant sea life.

From feedback each ship call, the team actively tweaks the experience. (Passengers get a card in their cabins on the day of the call, inviting their online feedback for the chance to win on-board credit.)

'Seating and shading are still a work in progress,' Diaz-Gonzalez said. 'We're doing a lot of testing on the arrangement of the beach chairs.' For example, research showed a four-two-four configuration is how people typically group chairs, so that's how they're arranged.

'The shade aspect is so important,' Diaz-Gonzalez stressed. As a result, the beach umbrellas are complimentary because they go so far to enhance the experience.

She noted typical water parks have about a 50% shade cover. Perfect Day at CocoCay has more than 80%. And in six months or so, when the palm trees and other landscaping fill out, there will be even more.

Royal Caribbean has elevated the food offerings. Besides the standard burgers, hot dogs and grilled chicken, there are choices like a portabello-mozzarella sandwich, a self-serve taco bar with tortillas made on site and a few for-purchase items.

The signage is great. Restrooms, lockers and handwashing stations are easily found. Accessibility features include lifts at every pool, hardened paths and beach wheelchairs. Lifeguards are everywhere — CocoCay employs 100 — at each slide for the little kids, thrill slide landings, pools and beaches.

It's all beautifully thought out, and the design flows effortlessly. The music in some areas doesn't disturb others nearby.

On Saturday, people of all ages seemed to be having a fabulous time — from the toddlers enthralled by the galleon and Splashaway Bay's little slides and geyers to families and teens piled into tubes shrieking excitedly on the slingshot, to couples mellowing out on the beach or enjoying the DJ and drinks at Oasis Lagoon to those taking in the sweeping views from the Up, Up and Away helium balloon.

It's clearly a hit. Time will tell how the island absorbs greater numbers and how Royal Caribbean takes the Perfect Day concept to further locations.