Hong Kong demonstrations have not disturbed cruise operations so far 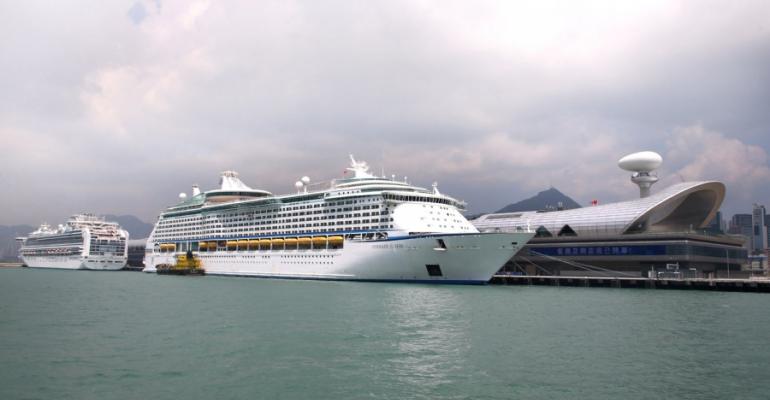 Voyager of the Seas 'not affected by protests in the city,' Royal Caribbean said. The ship is pictured Monday at Kai Tak Cruise Terminal alongside Sapphire Princess

A major cruise line and the Kai Tak Cruise Terminal operator told Seatrade Insider pro-democracy demonstrations in Hong Kong have not interfered with cruise operations, apart from the need to reroute some excursions.

Thousands of pro-democracy protesters remain camped on the streets in several key commercial districts and some news media have been predicting a showdown with the authorities on Wednesday, China's national day.

Yet, so far, according to the New York Times, it has been a 'diligently clean, exceedingly polite and scrupulously peaceful insurgency.'

The same sentiment was expressed by Jeff Bent, managing director of Worldwide Cruise Terminals, operator of the Kai Tak Cruise Terminal, in an email on Tuesday.

'So far, the situation in Hong Kong is quite manageable. It has been entirely peaceful—not a single broken window,' Bent said.

'But there are three key roads which are blocked,' he added. 'We informed the ships and passengers not to go to these areas, or to take the metro. These three roads are not near the terminal, but some of the shorex coaches had to reroute.'

As earlier reported, Kai Tak Cruise Terminal on Monday handled its first double call, of Sapphire Princess and Voyager of the Seas, and Bent had expressed his satisfaction with the operation.

A Royal Caribbean spokeswoman in Miami said her company is monitoring the situation in Hong Kong.

Voyager of the Seas completed its Monday turn, 'departed on scheduled and was not affected by protests in the city,' spokeswoman Cynthia Martinez said.