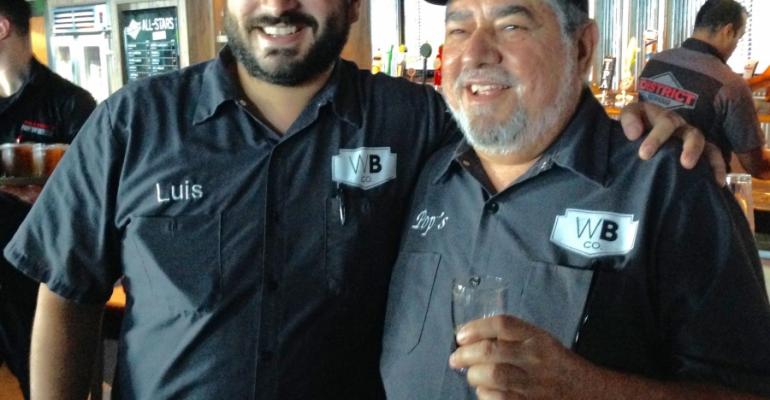 It offers 24 beers on tap and more than 50 bottled beers in a rustic setting with a keg room, industrial flooring and exposed brick columns. There's live music at night, and sometimes artists from other acts on the ship show up to perform in unscripted jam sessions.

But the craft beers rule.

'We are artisans,' 'Pops' Brignoni said. 'A dream come true' is how he described The District Brew House.

Wynwood Brewing Co. provides three beers there. The prize-winning La Rubia is a 'true American blonde ale made with Czech Saaz hops, German Pilsner malts and good old Miami water,' as Luis Brignoni Jr. put it. Created for his mom, a Miller Lite drinker, La Rubia is floral and fruity with a little sweetness, yet has a dry finish.

Also prize-winning, Wynwood's Pop's Porter is a robust porter with hints of chocolate and coffee, 'a great beer to pair with dates stuffed with chorizo,' Brignoni Jr. said. It goes with cigars, too.

And, brewed specially for Norwegian Escape is Wynwood's The District Pale Ale, 'great to pair with pizza, burgers and chicken wings.'

Almost all craft beer is non-pasteurized so it has to be continuously refrigerated and has a very short shelf life, elaborated Wes Cort, director, restaurant & beverage development and operations, Norwegian Cruise Line Holdings. Managing 24 draft lines is complicated, he added.

Beer flights are $7.95. 'A Taste of Florida' includes the three Wynwood beers and Funky Buddha, a wheat beer from Fort Lauderdale. 'A Taste of Belgium' has Stella Artois, Hoegaarden White, Leffe and Duval.

Besides the Wynwood brews, beers on tap include Magic Hat #9, a pale ale from Vermont; Left Hand Milk Stout from Colorado, Due South Caramel Cream Ale from Boynton Beach, Florida; and Newcastle Brown Ale from the UK. Each is $7.95.

The beers in bottles and cans range from Ireland's Harp and China's Tsingtao to American standards like Bud Light and the less standard Florida Cracker, a Belgian-style witbier brewed in Tampa. A Foster's lager oil can from Australia and the Franziskaner Hefe-Weiss from Germany are the priciest non-draft choices at $8.95 each.

Cort said the best sellers so far are the drafts—La Rubia, which goes for $8.95, followed by The District Pale Ale, $7.95. That was true even when Norwegian Escape debuted in Germany and extra German beers were stocked in The District Brew House.