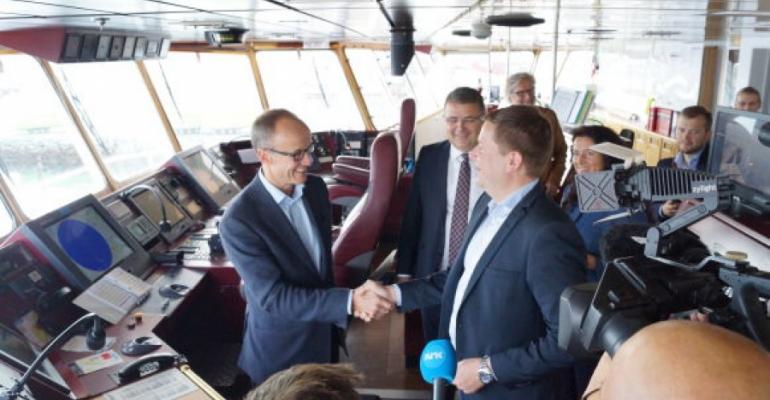 In a major leap on the environmental front, Hurtigruten plans a hybrid propulsion system for its 21,000gt newbuilds using battery power for clean, silent operations in the most sensitive areas.

For months ceo Daniel Skjeldam has talked about Hurtigruten's desire to implement such a system. On Thursday the company announced a hybrid solution developed by Rolls-Royce, with the Bellona Foundation central to the project.

'There's no doubt the future of shipping is both silent and emission-free. We will use our new expedition ships as "icebreakers" for this technology and show the world that hybrid operation on large ships is possible now,' Skjeldam said.

Bellona founder and president Frederic Hauge called it a 'historic day for Norwegian shipping and Norwegian maritime technology,' adding that the use of batteries on such large ships 'represents a huge inroads in emissions from shipping, and is just the beginning.'

Already in the first phase, the new hybrid technology makes it possible to sail fully electric for 15 to 30 minutes at a time. Yet it's the total savings that are most important. The technology, in combination with hull design and energy efficiency on board, reduces fuel consumption and carbon dioxide by a whopping 20%. This represents in excess of 3,000 tons of CO2 per year.

The two Hurtigruten newbuilds are estimated to cut CO2 emissions by 6,400 tons per year compared with conventional ships. This corresponds to the annual emissions of 5,540 new vehicles.

'Large ships burn large amounts of fuel, and the savings by switching to electric power is significant,' Skjeldam said. In addition, it's possible that possible future regulations levy costs for CO2 emissions, and shipping will have to adjust quickly.

A crucial piece of the project fell into place when Enova, a Norwegian government enterprise that promotes initiatives to reduce energy consumption, commited 45.1m Norwegian kroner ($5.5m), about a third of the NOK125m investment cost of the project.

'This is the first time such large ships will be launched with the ability to operate with clean battery power. If the experience gained here is good, it opens the door for similar solutions in cruise ships worldwide, but also in the coastal fleet where the combination with shore power becomes even more relevant,' Enova ceo Nils Kristian Nakstad said.

The hybrid vessels will be developed in two phases. The first ship, to be delivered in July 2018, will have an electric auxiliary engine to enable a 20% reduction in CO2 emissions. The second ship is scheduled to be equipped with a full hybrid engine that can propel it on all-electric power over long distances in the fjords, harbors and, especially, in vulnerable areas.

The aim is to then upgrade the first ship to the full hybrid engine.

'Being able to sail on electricity is not only a great benefit to the environment, it will also make a nature experience for guests stronger. Imagine sailing silently in the Trollfjord without any emissions,' Skjeldam said.

[For more about Hurtigruten's newbuilds, look for the cover story on the future of expedition cruising in Seatrade Cruise Review's latest issue, debuting at Seatrade Cruise Med.]