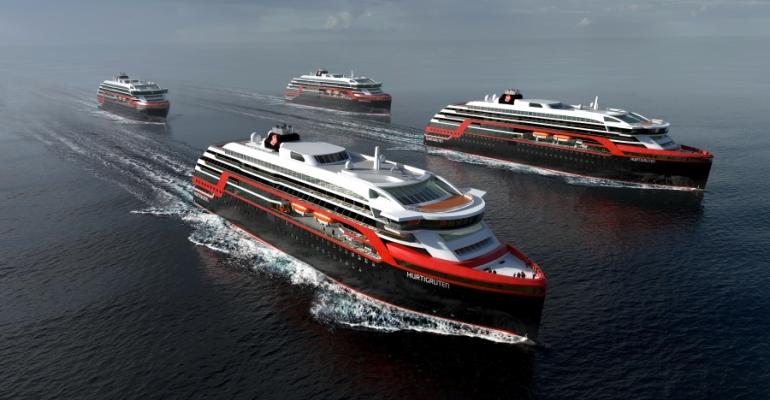 Hurtigruten's announcement to build up to four new explorer ships at Norway's Kleven shipyard is based on its belief in rising demand for adventure toruism, the company's ceo Daniel Skjeldam, told Seatrade Cruise News.

'This is a milestone for us and an expression of our confidence in the growth of the global market for adventure tourism. We are to build the most formidable expedition ships the world has seen.'

The signing for two, plus two options, 300 cabin, 600 passenger adventure cruise ships marks the largest investment Hurtigruten has made in its more than 120-years of exploring the Arctic and Antarctic waters. The first ship is due for delivery in summer 2018, with a second coming one year later. Both ships will be ice-classed and be able to sail futher afield, as well as on the company's traditional Norwegian coastal routes.

'These orders see our explorer fleet grow for the current four ships to six and will enable us to offer a host of activities for adventure seekers, from climbing and kayaking to rib-tours, whale and sea eagle safaris in unspoilt natural surroundings and expand our current itineraries.'

Already in 2017 the company will offer explorer travel to additional new destinations such as the Amazon Rainforest and Arctic Canada. The ceo sees opportunities to deploy ships further afield than Europe and the Americas and does not rule out expanding into Asia.

The vessels will be designed and developed by Rolls-Royce, with the assistance of renowned Norwegian ship designer Espen Øino, and built by Kleven, a longstanding partner. Final plans for the ships will be ready in a couple of months, informs Skjeldam.

Kleven is Norways largest shipbuilding group specialising in building and equipping large and technologically advanced offshore vessels. It is a pioneer in the construction of LNG powered ships. The Group has two shipyards: Kleven Verft AS in Ulsteinvik and Myklebust Verft AS in Gursken in the Sande municipality.

The new ships will be designed and customised specifically for adventure-rich expedition voyages in the Arctic and Antarctic regions, as well as along the Norwegian coastline and be quipped with advanced environmentally-friendly technology to reduce emissions, underlining Hurtigruten's vision of playing a lead role when it comes to green shipping, he added.

Hurtigruten’s new ships will also offer lectures on topics relevant to the destinations they sail to from experts in areas such as history, zoology, botany, and environmental science. In addition, experienced expedition teams will accompany passengers on educational excursions to isolated places only accessible by ships or zodiac boats.

'People no longer want to spend their holiday time being passive spectators. The new adventure traveller is looking for authentic experiences, which is why sedentary, standardized travel packages are becoming less popular and active adventure travel is booming,' Skjeldam adds. 'Our experience is that explorers travelling with Hurtigruten crave adventurous activities and our product is hitting home in a lot of source markets.'

Sjeldam lists Germany, Nordic countries, UK and US as its top source markets.