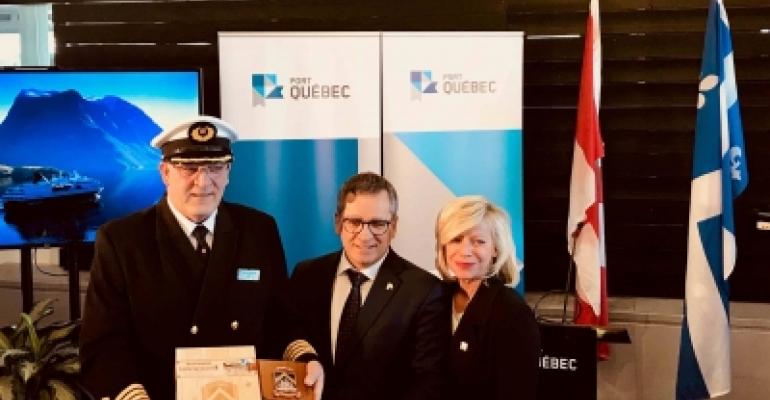 From left, Fram Capt. Ole Johan Andreassen, Port of Québec President/CEO Mario Girard and Minister of Tourism Caroline Proulx PHOTO: Port of Québec
Québec Minister of Tourism Caroline Proulx was on hand for the arrival of Hurtigruten’s Fram at the Ross Gaudreault Cruise Terminal on Thursday. The expedition vessel is the first of its kind to call at the port and it launched the earliest cruise season there.

'The Port of Québec is thrilled to welcome so many new cruise lines this summer, starting as early as May 2nd with the MS Fram,' Québec Port Authority President and CEO Mario Girard said. 'Hurtigruten is a pioneer expedition ship company paving the way for an evolving cruise industry. Their vision is aligned with the strong commitment of the Port of Québec in sustainability and we are fortunate that they chose Québec city as their turnaround port.'

'As we are expanding our fleet, we are also expanding our number of destinations. Québec is not only a must-see destination in itself, it is the ideal gateway to areas such as the St. Lawrence and the Great Lakes,' said John Downey, Hurtigruten's newly appointed president for the Americas.

'Both Québec and the surrounding area are a perfect fit for Hurtigruten and our modern-day explorers. We are excited about this being our first call in Québec. I am sure it’s just the beginning of what will be more calls in broader parts of the year,' Downey added.

For her part, Proulx noted the cruise industry is growing and generates more than $193m in annual tourist spending in Québec. 'Despite keen international competition, Québec City and the Port of Québec stand out and are contributing to the rapid development of Québec tourism,' she said. 'They are the ideal gateway for cruise passengers who arrive in the heart of charming, pastoral, lively Old Québec City.'

This season will see record deployment from Holland America Line, Princess Cruises and Cunard, including numerous overnights in Québec. Holland America has the longest and most extensive cruise season in Québec with 34 calls from May through October.

Princess will offer six 10-day sailings and one 13-day repositioning cruise on its newly refurbished Caribbean Princess, with overnight stays on every sailing. Princess will also make its first summer call in Québec, departing on Aug. 9.

Committed to continuing to growth, with the goal of welcoming 400,000 cruisers by 2025, the port has announced the investment in a second cruise terminal at Berth 30, located in front of the UNESCO World Heritage panorama of Old Québec.