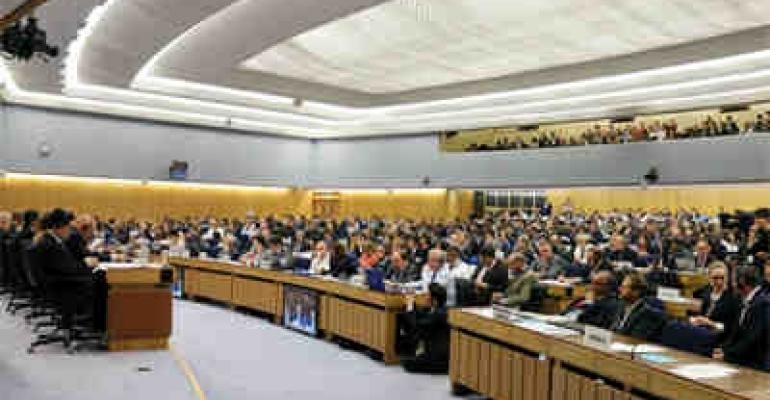 The initial GHG strategy was adopted by IMO’s Marine Environment Protection Committee during its 72nd session. The meeting was attended by more than 100 IMO member states

Nations meeting at the International Maritime Organization adopted an initial strategy for the reduction of greenhouse gas emissions from ships, with the goal of phasing them out as soon as possible.

Under the identified 'levels of ambition,' the initial strategy envisages for the first time a reduction in total GHG emissions from international shipping which, IMO said, should peak as soon as possible, and to reduce the total annual GHG emissions at least 50% by 2050, compared to 2008. Meanwhile, efforts will be pursued toward phasing out GHG emissions entirely.

The strategy includes a specific reference to a 'pathway of CO2 emissions reduction consistent with the Paris Agreement temperature goals.'

The initial strategy was adopted by IMO’s Marine Environment Protection Committee during its 72nd session, a meeting attended by more than 100 IMO member states.

The initial strategy represents a framework for member states, setting out the future vision for international shipping, the levels of ambition to reduce GHG emissions and guiding principles. It includes candidate short-, mid- and long-term further measures with possible timelines and their impacts on states. The strategy also identifies barriers and supportive measures including capacity building, technical cooperation and research and development.

Secretary-general Kitack Lim said the adoption of the strategy would allow future IMO work on climate change to be rooted in a solid basis.

According to the 'roadmap' approved by IMO member states in 2016, the initial strategy is due to be revised by 2023.

Continuing the momentum of work on this issue, MEPC agreed to hold the fourth Intersessional meeting of the Working Group on Reduction of GHG emissions from ships later in the year. This working group will be tasked with developing follow-up actions to the Initial strategy, further considering how to progress reduction of GHG emissions in order to advise the committee and reporting to the next MEPC session, which meets Oct. 22-26.

IMO has already adopted global mandatory measures to address the reduction in GHG emissions from ships and is executing global technical cooperation projects to support the capacity of states, particularly developing states, to implement and support energy efficiency in the shipping sector.

The initial strategy's levels of ambition note that technological innovation and the global introduction of alternative fuels and/or energy sources for international shipping will be integral to achieve the overall ambition. Reviews should take into account updated emission estimates, emissions reduction options for international shipping, and the reports of the Intergovernmental Panel on Climate Change.

And GHG emissions from international shipping are to peak as soon as possible with the total annual GHG emissions reduced by at least 50% by 2050 compared to 2008, while pursuing efforts to phase them on a pathway of CO2 emissions reduction consistent with the Paris Agreement temperature goals.