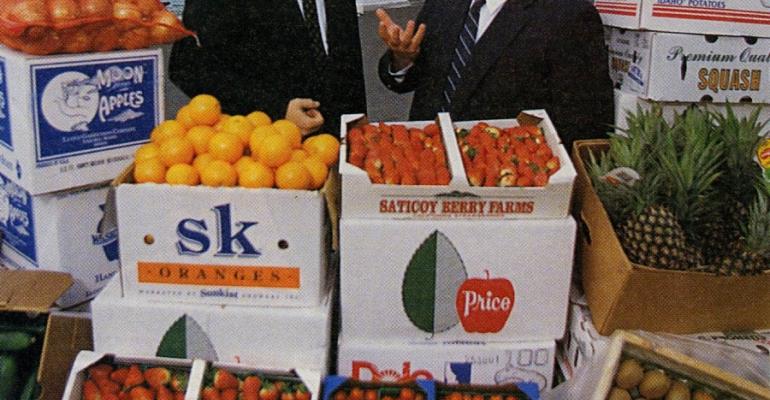 Lew Fraser, right, with his son, Lewis II, at PortMiami in 1996. The image was commissioned for a Seatrade magazine profile.

Services were held Saturday in Miami for Lewis 'Lew' A. Fraser, whose catering concessions once provided the food, beverages, chefs, cooks and waiters for Royal Caribbean, Costa Cruises, Regency Cruises and Premier Cruise Lines. Fraser died Wednesday. He was 74.

'The cruise industry would not have achieved all it has if it were not for the creativity and quality of products produced by people like Lew Fraser,' said veteran senior cruise executive Bruce Nierenberg.

'He was a great guy and friend, and an operator a cruise line owner could always count on to deliver. We will all miss him.'

One of the early and most successful cruise catering concessionaires, Fraser owned Poseidon Marine Services, Fraser and Stellar Maritime, companies that served some of the leading Florida-based cruise lines. He oversaw menus, handled the purchasing of thousands of food and beverage items along with galley and dining room supplies, and worked with crewing agencies around the world to fill thousands of positions.

Fraser played a major role in shaping the on-board catering product and service for several lines, helping fuel the popularity of cruising in the 1970s, '80s and '90s. Friendly, kind and jovial, he was a popular personality in South Florida and a mentor to many.

Poseidon was associated with Royal Caribbean for years, starting with its first ship in 1970, and helped establish the brand's fine reputation.

Nierenberg credited Fraser as the man behind the quality of the 'ground-breaking RCCL cruise product in the 1970s,' whose 'many innovations and concepts ... made RCCL the industry leader in mass market hotel operations in that era.'

Fraser also served as the hotel operator for SeaEscape's cruises to nowhere, which Nierenberg said introduced many people to cruising.

'Regardless of what companies he served he never compromised service and quality control. He never cut corners and always delivered,' Nierenberg said. He added that many of Fraser's senior executives went on to leadership roles in cruising's hotel sector.

Born in Florida, Fraser was the son of a successful Caribbean hotelier and shipping man. According to Kevin Griffin, owner of The Cruise People Ltd., a ship called the Lewis Fraser was named for the 12-year-old Lew by his father, Jamaican-born Frank Leslie Fraser, in 1952. F. L. Fraser founded Eastern Shipping Corp., which later became Eastern Cruise Lines, then part of Admiral Cruises and, ultimately, Royal Caribbean.

'Lew was a very generous guy and he supported a whole host of causes,' noted Jay Lewis, president of MarketScope in Miami.

According to a Miami Herald obituary, Fraser was a member, deacon and elder at Old Cutler Presbyterian Church, a board member of Westminster Christian School and the founder of Ministries in Action. He also was active in the Rotary Club.