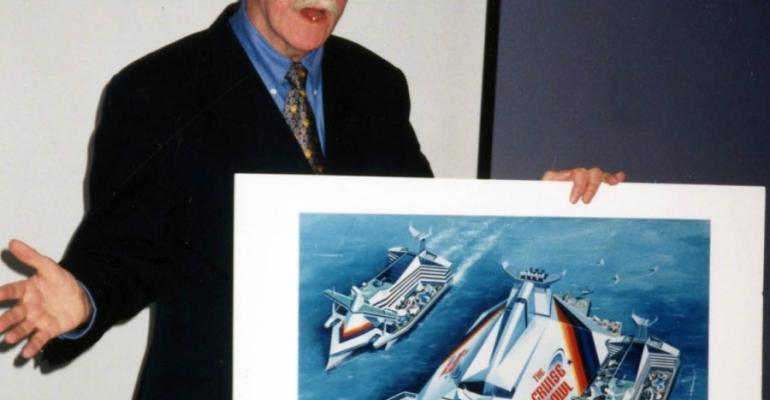 John McNeece: 'a designer of vision and also a great communicator'

It is with sadness that Seatrade announces John McNeece, interior designer of a number of iconic cruise ships built in the last 30 years, died recently, aged 75.

McNeece was born in Govan, Glasgow within sight of the ship yards. He studied at The Glasgow School of Art, graduating in 1962, winning a post graduate scholarship. In that year he participated in the design of three McBrain ferries, one of which still sails today as the upmarket cruise ship Hebridean Princess.

On leaving art school, he and fellow designer Alistair Fletcher set up the first interior design practice in Scotland, Fletcher McNeece undertaking a variety of work from county buildings, to law courts to hotels and casinos.

In 1982, a London office was opened and in 1985 John and his wife Norma moved permanently to London.

The following year, the practice was engaged by Royal Caribbean to design Sovereign of the Seas, the first of the mega cruise ships. Two years later McNeece bought his partner's share of Fletcher McNeece and the company after his own name was established.

Multiple cruise commissions followed, notably, the first five ships for Celebrity Cruises, Oriana and Aurora for P&O Cruises and eight ships for Renaissance Cruises which all sail today under the flags of several main cruise lines. McNeece took on the refurbishment of QE2, many ships and ferries and also numerous private commissions for super yachts.

'As well as being a designer of vision, John was also a great communicator.  As a speaker in Seatrade programmes and particularly as a lecturer at the Seatrade Cruise Academy in Cambridge, he intrigued audiences with his flare and sense of style, delivered always in his trademark Glaswegian brogue,' commented Chris Hayman, chairman of Seatrade.

McNeece's final challenge was The World, with 165 apartments at sea.

He retired in 2008 and for the next three years was president of the Scottish Arts Club in Edinburgh.

'Always with a twinkle in his eye, his sense of humour was legendary as were his before and after dinner speeches,' said Bill Gibbons, former chair of the Passenger Shipping Association, a personal friend of the McNeeces.

McNeece was a Freeman of the City of London, a Liveryman of the Worshipful Company of Shipwright, a visiting Fellow of the Seatrade Cruise Academy, and a Fellow of the Royal Institution of Navel Architects.

'John will be sadly missed by the shipping and design industries and by his wife and family and by his many friends,' said Gibbons.