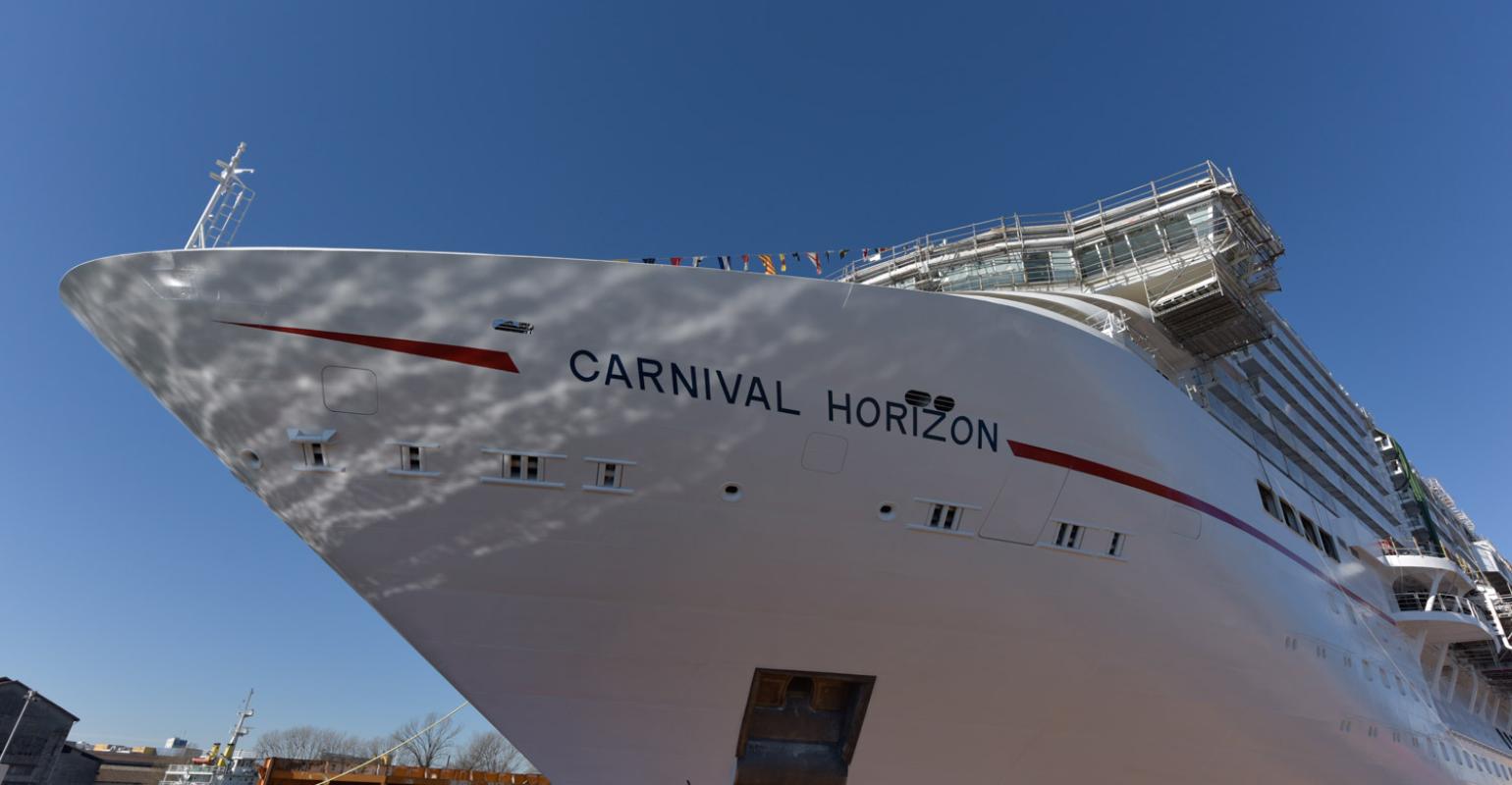 No one was injured and no pollution occurred, but there was damage to Pier 90, and Carnival Horizon sustained minor damage above the waterline, totaling about $2.5m FILE PHOTO: Fincantieri
Ineffective interaction between the master and the docking pilot figured into Carnival Horizon hitting an adjacent pier while maneuvering into the Manhattan Cruise Terminal in August 2018.

Other factors included the bridge team’s ineffective oversight of the docking maneuver and the placement of the third officer in a location without view of the bow.

These were the just-released findings of the US National Transporation Safety Board’s Marine Accident Brief.

On the morning of Aug. 28 last year, Carnival Horizon — with a total of 6,361 people on board — was maneuvering to berth No. 2 at Pier 88 in New York when its bow struck the corner of the adjacent Pier 90.

No one was injured and no pollution occurred, but Pier 90’s walkway, roof parking garage and facilities suffered extensive structural damage, and the ship sustained minor damage above the waterline, totaling about $2.5m in cumulative damage.

The NTSB determined that the probable cause of Carnival Horizon’s contact with Pier 90 was the ineffective interaction and communication between the master and the docking pilot, and the bridge team’s ineffective oversight of the docking maneuver. Contributing was the placement of the third officer in a location without view of the bow to monitor the close approach to Pier 90.

Carnival Cruise Line’s navigation policy requires closed-loop communication and a process called ‘thinking aloud,’ meaning ‘sharing verbally a mental model of the current situation and future situations,’ which allows for greater situational awareness of the bridge team. Closed-loop communications ensure that when an order or request is made, the person executing it understands and acknowledges that order by repeating it.

‘There was little audible evidence that the thinking-aloud concept was in practice during this accident sequence,’ the NTSB said in its report. ‘While the pilot was issuing bow thruster and tug orders, the master used the stern Azipods with the intention to bring the ship closer to Pier 90 but did not verbalize his actions to the pilot or bridge team.’

The accident brief noted the  New Jersey Maritime Pilot & Docking Pilot Commission conducted its own investigation and concluded that the Metro docking pilot failed to perform the appropriate pilot-to-pilot and master/pilot exchanges.

Bridge team 'could have been more effectively engaged'

NTSB investigators also said the bridge team could have been more effectively engaged in the ship’s maneuvering to the dock.

‘Although Carnival’s navigation policy and task assignments require monitoring of the person conning the vessel, cross-checking of the ship’s position and predicting track and headway, there was no evidence that any bridge team member probed or alerted the master and pilot of the headway of the vessel toward the corner of Pier 90,’ the report stated. ‘For example, the staff captain was responsible for overseeing the entire bridge operation and monitoring the master and the pilot, yet he never voiced concern about the vessel’s speed of approach toward Pier 90 before impact.’

Nor was there evidence that the bridge team discussed any minimum safe distances during the prearrival briefing or during the master/pilot exchange with the docking pilot.

Lookout officer could not see tip of the bow

Further, the third officer was designated to communicate distances and clearances from the port and starboard mooring platforms forward but was not positioned in a suitable location. From either platform ― 15 feet below the tip of the bow, at an angle of about 45 degrees and in darkness ― his view of the contact point was completely obstructed by the ship’s hull, the NTSB said.

Therefore, he had to estimate the distance from the tip of the bow ― a point he could not see ― to Pier 90. Moving between two points meant that he was estimating the distances from two different vantage points and was also losing time as he moved between the port and starboard platforms.

The NTSB said Carnival has amended its procedures for Carnival Horizon to include positioning a crew member to report distances from the tip of the bow while maneuvering into the Manhattan Cruise Terminal.

The report stated: ‘As the ship continued to maneuver to the berth and rotated clockwise around the end of Pier 88, the bridge team and pilot progressively lost awareness of the vessel’s headway toward the end of Pier 90. The pilot was focused on reducing the vessel’s rate of turn to starboard, while the ship was still moving forward toward Pier 90. The closing distance went undetected or unchallenged by the bridge team until the ship was so close to the pier that no maneuver could have prevented the impact.’

The full accident report can be downloaed here.