Inside the new Azamara Pursuit 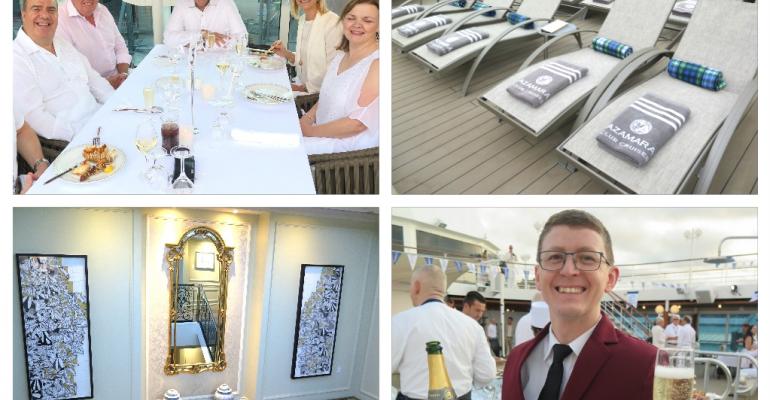 In its conversion to join Azamara Club Cruises, the ship first underwent drydock for statutory and mechanical work and hull painting at Grand Bahama Shipyard before crossing to Belfast for wet dock outfitting at the legendary Harland and Wolff under the supervision of MJM Group.

What set this refurbishment apart was 'the passion. The Irish really took pride in this,' Richard Fain, chairman and CEO of Royal Caribbean Cruises Ltd., said.

The ship is the last in the eight-strong R series originally built for Renaissance Cruises, and most recently sailed as Adonia for P&O Cruises (and had a stint with Fathom).

The former R8 now shares the same stylish look—mingling classic and contemporary—of Azamara Quest and Azamara Journey (the former R7 and R6), gained during their revitalizations in the past two years.

'There's no clue you're on a ship constructed in 2000. It looks brand new,' Pimentel said during Azamara Pursuit's two-night naming ceremony voyage this week. He praised the fittings and said additional suites make a total of 351 staterooms, more than the 345 on the sister ships, for passenger capacity of 702.

A number of Deck 8 staterooms were transformed into 16 larger Club Continent Suites, and a pair of Club Spa Suites were added next to the Sanctum Spa on Deck 9. At 414 square feet/38.5 square meters each, these spa rooms feel spacious and elegant, and they have a whirlpool tub enclosed in glass beside the 40-square-foot/3.7-square-meter veranda.

The Den, powered by AFAR

The main public room change was removing the casino that was central to Deck 5. 'The casino is not the essence of this brand,' Pimentel said.

In its place is The Den, a lounge with grand piano, bar and desks for future cruise sales and shore excursions (previously housed on Deck 4). Through a partnership with AFAR—a publication focused on experiential travel—The Den also offers travel books and resources.

New artworks were curated by Michael Loveland, a Miami-based artist who traveled the world to uncover new contemporary talent. His collection for Azamara Pursuit nicely contrasts with the ship's classical elements.

The overall decor retains original details like dark wood paneling and white columns, while contemporary lighting, carpets and furnishings update the look, and an understated palette of taupes, beiges and creams adds sophistication. In the Deck 10 observation lounge, there are occasional pops of red in accent pillows and armchairs. A great addition there is the row of daybeds overlooking the forward-facing windows, making the perfect spot to curl up with a book or iPad.

'I was very impressed by the entire ship. You don't have any sense that this is a 20-year-old vessel,' Sean Flynn of Expedia CruiseShipCenters in Montréal said.

'The ship is marvelous and I can wholeheartedly endorse it,' said Marni Becker, director of cruise sales, Protravel International. 'The physical plant looks great. I love The Den. I'm so happy that they have this ship as a vehicle for growth. I hope they continue to grow.'

Flynn also singled out The Den. 'It's an inviting, informal area, a very relaxed environment. Instead of a businesslike shore excursions desk, it's open. There's a bar. When you consider the primary mission of Azamara, it invites engaging in conversation about the shore excursions. I can see the guests really enjoying it.'

When it comes to the staterooms, Flynn called his standard Club Veranda Stateroom 'beautiful.' The room was 'intelligently designed with a layout that makes the most of the space,' though the bathroom and shower are 'very small.' It would have been a tall task, Flynn said, to re-pipe the whole ship to enlarge those.

'It's the service that brings people back'

On the two-night naming ceremony voyage, Flynn didn't have the chance to sample the specialty restaurants Prime C (steaks and seafood) or Aqualina (Italian). However, he was 'exceptionally impressed' with the service at the indoor-outdoor Windows Cafe: 'You sit down and someone is there to assist you.'

This made Flynn think of Azamara's pitch: 'The itineraries are what bring people to Azamara but it's the service that brings them back.

'The staff on board were perfect. There was no occasion where I felt anything lacking.'