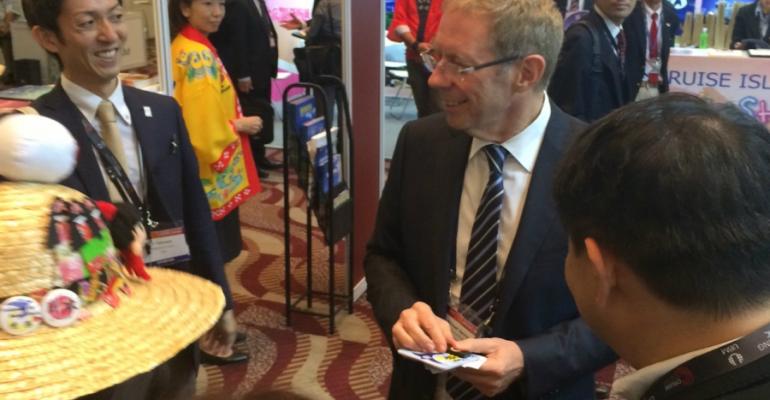 Just over one year after contracting two 150,000gt cruise ships at Meyer Werft, Star Cruises informs the interior design features are finalised and the project is making good progress at Papenburg.

The vessel, to be called Genting World, is double the gross tonnage of 1999-built SuperStar Virgo with 76% outside cabins and 71% balcony cabins, compared to 62% and 42% on the earlier newbuild, Michael Hackman, evp cruise operations and overseeing newbuilding for Genting HK Ltd, told delegates at CSAP2014.

The new design features 1,100sq mtr of retail space, over 30 food and beverage outlets from sushi to Italian restaurants, a 1,000-seat theatre including drinks holders for each seat and a three-tier atrium with 360-degree bar and centre stage.

The interior colour schemes will be mainly golds and reds.

As with previous newbuilds there will be numerous interconnecting cabins for families, a very large spa and wellness centre offering beauty treatments and reflexology; karaoke lounge and interactive TV centre - all important entertainment draws for Asian passengers, Hackman added.

As usual with Star Cruises, the main itineraries will focus on two-, three- and five-night sailings requiring ships with high service speeds as multiple destinations/itinerary intensive programmes are preferred, he said.

‘Trying to keep Asian consumers on board for seven days is not going to happen yet,’ Hackman stated.

Explaining Asian market from Star’s perspective, he said they are between 25 and 55 years old, hail from China, India, Japan, Korean, Malaysia and Australia. They are mainly couples, seniors, honeymooners and MICE groups.

Travelling with extended family and friends is common, he added.

The company earlier announced the first ship will operate from Hong Kong.