It's game on for global cruising. Can the Caribbean compete? 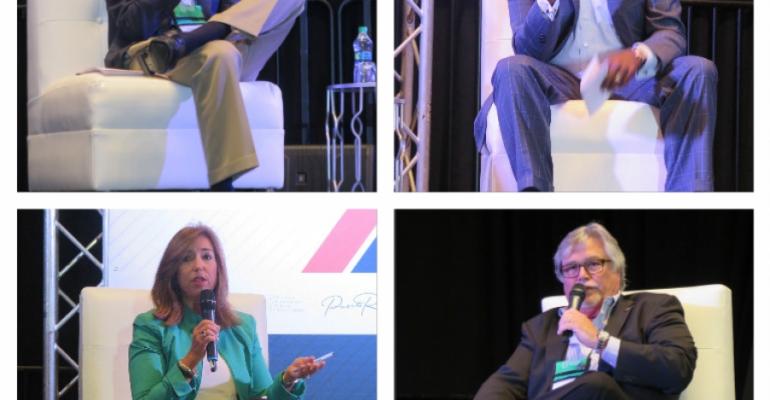 From top left clockwise: Adam Goldstein, Orlando Ashford, Micky Arison, Christine Duffy (Photos: Anne Kalosh)
The Caribbean can keep thriving even as other global destinations grow provided it stays energized and engaged, cruise line leaders said Wednesday. But it's not enough to gear up for one 6,000-passenger ship—think about several in a day.

The CEO Round Table at the Florida-Caribbean Cruise Association Conference & Trade Show praised, encouraged and challenged the destinations.

In the global competition for cruise business, there's 'a lot of state of the art thinking and willingness to invest in infrastructure' on Asia's part, said Adam Goldstein, president and chief operating officer, Royal Caribbean Cruises Ltd. He added the Caribbean is 'very capable of competing' if it steps up.

Goldstein referred to talks with destinations like Puerto Rico, St. Lucia and Antigua as 'really heartening. I felt like there was a better dialogue than in the past. They were very switched on.'

Other regions are, too, so it's a matter of continually innovating.

'The game is on, but I think the Caribbean can compete globally,' Goldstein said.

The region is set to grow 6% next year, according to Micky Arison, chairman, FCCA/Carnival Corp. & plc, adding: 'We're very pleased with bookings in the Caribbean over the last 12 to 18 months. There's plenty of room for growth but we have to be careful we don't overdo it.'

'It's up to all of us to keep the destinations fresh and exciting. For our guests, a fun in the sun destination is what they're looking for, and the Caribbean and Mexico deliver that,' said Christine Duffy, president, Carnival Cruise Line. 'Keep the experiences new, exciting and different, and keep people coming back.'

Families are an important market, and they merit special attention from tour operators. 'Our guests are willing to pay for those unique experiences they can't do on their own and we deliver them turnkey,' Duffy said.

'Make sure the destination speaks to the source market. Customize for different guests. Ours like to touch, taste and explore,' advised Orlando Ashford, president, Holland America Line, who was making his first appearance at an FCCA annual conference. He described 'a lot of wonderful meetings these past days' and 'powerful discussions.'

'The Caribbean is a strong product,' Ashford said, yet it can take a cue from how Holland America, with a 140-year legacy, continually 'adds some energy to the story.' For example, a new partnership with America's Test Kitchen highlights the line's culinary chops in a fresh way.

Round table moderator Michele Paige, FCCA president, noted average passenger spending in the Caribbean ranges from $40 to $200 by port. What makes the difference?

The cruise executives also urged destinations to think about passengers who don't buy tours, since they typically rate ports lower than those who take excursions.

Many of Carnival Corp.'s highest rated ports are ones it has developed, Arison said. Currently No. 1 in guest ratings is Roatán's Mahogany Bay, followed closely by Half Moon Cay. Grand Turk and Amber Cove get 'very, very good ratings,' too.

When such ports are developed, the company thinks about satisfying both passengers who buy tours and those who don't.

Arison said Carnival has been trying to develop a port near Cancún for 20 to 30 years, and one in Grand Bahama for 20 years. He hopes the latter is close to getting done.

Arison said this is misguided: 'We're the No. 1 purchaser of hotel rooms in Barbados, where our European brands operate, and No. 1 in Barcelona, where we operate two terminals. Our industry is synergistic with the hotel industry.'

It used to be that ports worried about accommodating an Oasis-class ship. Now, many lines—from AIDA to MSC—are building big, and it's not just planning to handle one ship of 4,000, 5,000 or 6,000 passengers.

Arison told the FCCA conference that from about 2020, ports can expect days when three, four or five of these ships arrive.

'We as an industry are going to have to talk about that,' he said.

Another thing the industry has to talk about—to the public—is its environmental leadership, Duffy said.

From Carnival Corp. contracting LNG-powered ships for multiple brands to Royal Caribbean's commitment to scrubbers and many other examples, cruising leads shipping on the environmental front.

Paige observed that in previous conferences, the talk was Cuba-Cuba-Cuba. That hasn't been the case at the FCCA event this week.

Arison said itineraries will include Cuba with other destinations but it's going to be awhile before the island has a big impact on the cruise business.