It's a go: Costa Concordia parbuckling to begin Monday 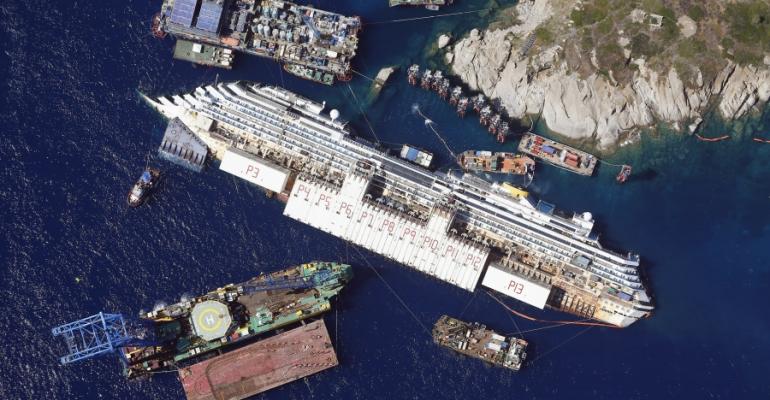 Costa Concordia - to be uprighted in a delicate three-phase operation

The largest, most challenging salvage project the world has ever seen—the raising of Costa Concordia—is set to begin early Monday morning in Giglio. Italy's Civil Protection authorities on Sunday confirmed the go-ahead for the operation in light of favorable weather forecasts.

Wind direction and force and wave height are all projected within the range of operational feasibility, and all preliminary operations for rotating the wreck have been completed, the authorities said.

Emergency Commissioner Franco Gabrielli, in agreement with the Monitoring Observatory president Maria Sargentini, confirmed the plan to initiate the parbuckling.

Operations are expected to begin shortly after 6 a.m., once the last ferry leaves Giglio for Porto Santo Stefano.

The process to upright the cruise ship, to be carried out in three phases, is expected to stretch over several days.

'Extremely challenging' is how Nick Sloane, senior salvage master for the Titan-Micoperi consortium, has described the operation. A captain with more than 27 years in the salvage and offshore oil and gas business, Sloane will lead the control room team positioned on a barge near the wreck.

The operation will be remotely controlled from there, with commands and signals such as the opening and closing of sponson valves transmitted via a pair of umbilicals.

Further details are here and at The Parbuckling Project.

Once upright, the wreck will remain in Giglio until the spring before being towed to a nearby port for breaking.

Costa Concordia capsized on Jan. 13, 2012, after ramming into the reef off Giglio. Thirty-two people died. Two bodies have never been recovered.

Capt. Francesco Schettino is on trial for charges of manslaughter, ship abandonment and causing a shipwreck.