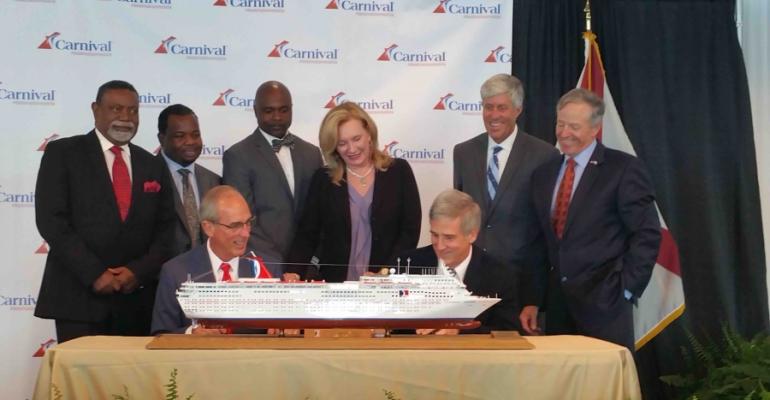 Confirming its long-awaited return to Mobile, Carnival Cruise Line said Carnival Fantasy will operate a year-long schedule of four- and five-day cruises to Mexico beginning in fall 2016. A deal for Carnival to go back to the city, where it last operated in 2011, had been expected.

'We’ve been working very closely with the port and city officials to make these cruises a reality and wish to thank Mayor Stimpson and his team for not only all their hard work but also for creating a welcoming and positive environment that makes these cruises an attractive option for today’s consumers,' Carnival president Christine Duffy said.

'We are pleased and excited to welcome Carnival Cruise Line back to Mobile,' Mayor Sandy Stimpson said. 'This agreement has been a priority since the day we took office. It represents a win for our city, a win for Carnival and most of all a win for the thousands of consumers who can once again enjoy a great cruise out of one of America’s greatest cities.'

Carnival had left Mobile in October 2011, after basing a ship in the city year-round since October 2004 when its cruise terminal opened.

Mobile officials never gave up their quest to get the line to return.

For more than four years the city has worked hard to show the cruise industry the great market for cruising within an easy drive of Mobile, according to Roger Blum, the principal of Miami-based Cruise & Port Advisors, who assisted in those efforts.

'This will be a great opportunity for Carnival to capitalize on this market, and a greater opportunity for the southern Alabama region to profit from the tremendous economic impact that this vessel will bring,' Blum told Seatrade Cruise News.