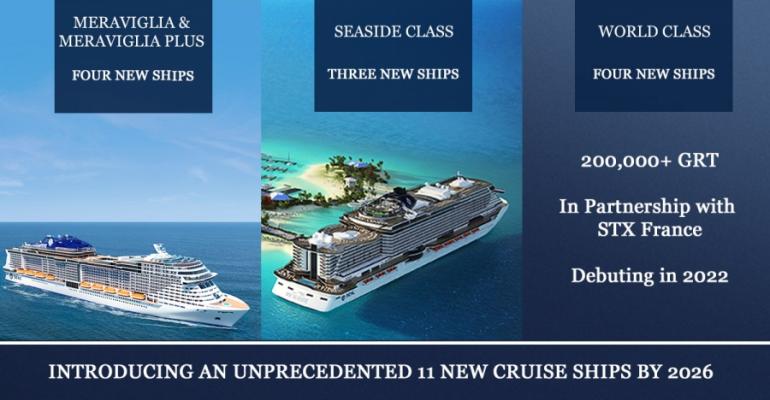 MSC's orderbook goes to 11 ships, counting three options, with deliveries scheduled into 2026
Updated with comments from the signing at Elysée Palace. MSC Cruises signed a letter of intent with STX France for up to four 200,000gt-plus, dual-powered (diesel-LNG) ships, an investment worth €4bn ($4.5bn). Two of the ships are firm and two are options. Each has approximately 5,400 lower berths.

Counting options, this brings MSC's orderbook to a whopping 11 ships: eight in France and three in Italy.

Today's newbuilds will be of a 'World Class' prototype design, which MSC Cruises executive chairman Pierfrancesco Vago said will be 'quite unlike anything currently existing in the cruise industry.'

Vago promised cutting-edge design, maximized open-air space, features for adults, families and children and 'a ship for all seasons and for all regions.'

The deal, officially announced this afternoon by French President François Hollande at his Elysée Palace residence in the presence of Gianluigi Aponte, founder and executive chairman of MSC Group, and Laurent Castaing, general manager of STX France, was described as 'the order of the century' by Elysée spokesman Stephane Le Foll, on French television this morning.

The French government holds a 33.4% stake in the Saint-Nazaire yard.

MSC already has four ships under construction at Saint-Nazaire: two in the 4,500-berth Meraviglia class to be delivered in 2017 and 2019, as well as two larger, 4,888-berth Meraviglia-Plus ships for delivery October 2019 and September 2020.

Speaking in French, Aponte cited the quality work of the French yard, the calm labor situation which ensures on-time deliveries and the vital contribution of Coface, the export credit agency. He said today's order would represent 36m hours of work and, by 2026, MSC will have invested €7bn in France and created 70m hours of work, equivalent to more than 3,000 full-time jobs over 12 years.

At Fincantieri in Italy, the company has two firmly contracted 154,000gt MSC Seaside vessels plus an option.

'In our memories,' President Hollande said, 'we have names such as Normandie, France, Queen Mary 2. MSC Meraviglia will be their follower.'