It's up! Parbuckling accomplished, Concordia wreck is upright 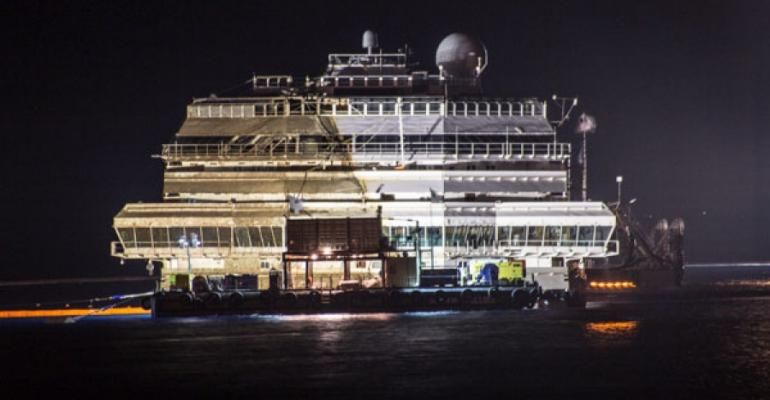 The wreck is resting safely atop an artificial seabed

4 a.m. Nineteen hours after it began, Costa Concordia's parbuckling has been completed. The wreck is upright and resting safely on six steel platforms atop 21 thick pillars drilled into the granite seabed.

Midnight update: Costa Concordia has rotated approximately 25 degrees from its starting position on Monday morning so the wreck no longer needs to be pulled by the strand jacks but is moving upright with its own momentum and the weight of the ballast water in the sponsons attached to the port side.

7 p.m. update: Strand jack operations resumed after an hour's suspension for a fast-response team to intervene and prevent slack cables from interfering with the tensioned cables.

The colossally complex effort to raise Costa Concordia got under way Monday morning and, seven hours into the operation, the salvage team reported operations were going according to plan.

Shortly after 4 p.m. local time, the wreck had rotated 10 degrees and the starboard side of the hull was dislodged from the reef following the application of a pulling force of about 6,000 tons by the strand jacks. It was anticipated the rotation can proceed with a gradually decreasing pulling force.

Ship images now show a watermark that is the discolored hull area which had been submerged.

The wreck needs to move 10 more degrees, to at least 20 degrees, to put the 11 sponsons attached to its port side at sea level. Initially, the strand jacks are pulling the vessel upright. When the sponsons reach sea level, they can be filled with seawater to take over the work by harnessing the force of gravity.

The salvage is daunting due to Costa Concordia's massive size and its delicate perch atop two granite spurs in an environmentally sensitive seabed area.

The parbuckling commenced at about 9 a.m. following a delay of several hours due to thunderstorms Sunday night on Giglio Island that prevented the positioning of the barge, Polluce, that houses the control room and other operative units directing the work.

The team members are operating the systems and monitoring the progress using eight monitors. Five microphone-equipped television cameras have been placed on Costa Concordia's highest deck to pick up sounds and track images during the parbuckling, helping the engineers to make adjustments depending on any twist and torsion that arises.

There are also monitors in a shoreside salvage room where other engineers and technicians are following the operation and can provide assistance if needed.

Commands and signals such as activation of the strand jacks, the opening and closing of sponson valves and data about the position of the wreck are transmitted between the wreck and the barge control room by a pair of cables or umbilicals, one used as a back-up.

Update: Reuters has had live video coverage of the operation, which stopped when the ship became vertical, but may resume later as work continues at the site.

Further information is here and at The Parbuckling Project.