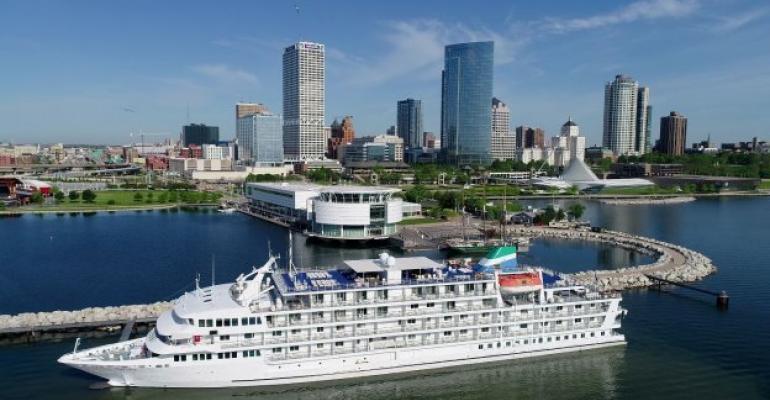 Pearl Mist is alongside at Milwaukee on July 3 and 4, taking in the fireworks and Summerfest, a huge music festival steps from the Pier Wisconsin cruise dock PHOTO: Milwaukee Journal Sentinel
On US Independence Day, July 4, American Cruise Lines' entire US-flag fleet will be sailing America’s rivers, coastlines and waterways — from 'sea to shining sea.' Pearl Mist of international sister line Pearl Seas Cruises, plying the Great Lakes, will be celebrating the day in Milwaukee.

Both brands plan festivities on board and have timed their ships to arrrive in port for local celebrations.

American’s coastal ships, paddlewheelers and modern riverboats are cruising across the nation. Up north, American Constellation will be in Petersburg, Alaska, for its festival, parade and fireworks. Down south, paddlewheeler America will be on the Mississippi River celebrating Louisiana-style in Baton Rouge. On the East Coast, American Constitution passengers will be able to see the massive fireworks displays in Narragansett and South Kingston, Rhode Island, before arriving later that evening to historic Newport.

American Star will be in Fall River, Massachusetts, for the town's annual fireworks, and Independence will be in Bath, Maine, for fireworks one day after being treated to a traditional lobster bake in Rockland, Maine. In the Midwest, riverboat Queen of the Mississippi will be in Pittsburgh, for a huge Three Rivers fireworks display.

Out west, cruising along the Columbia and Snake rivers, American Song and American Pride are in Richland, Washington, and Astoria, Oregon, respectively, while the Queen of the West, also on the Columbia and Snake itinerary, cruises through The Dalles, Oregon, with the chance to see snowcapped Mount Hood. American Spirit will dock in Port Townsend, Washington, in time for fireworks and local revelry.

In addition to the shoreside festivities, all American’s cruises over the 4th will have festive shipboard barbecues and themed cocktail parties hosted on the top decks. Ships will have patriotic decorations and passengers will receive commemorative American flag pins.

'The entire Milwaukee community comes outside to celebrate Independence Day. Pearl Mist passengers will have one of the single best views in the city,' Port Milwaukee Director Adam Schlicht said.

Over July 3 and 4, Milwaukee is also hosting Summerfest at the port, a gigantic music festival that takes place just steps from the Pier Wisconsin cruise dock. While there, Pearl Mist passengers will be treated to a festive shipboard barbecue and a July 4th themed cocktail party. The ship will be decorated for the holiday.

Pearl Seas is a partner in Milwaukee’s efforts to promote cruising. Port Milwaukee is a founder of the Milwaukee Cruise Collaborative and participates in the Cruise the Great Lakes initiative of the Great Lakes St. Lawrence Governors and Premiers.