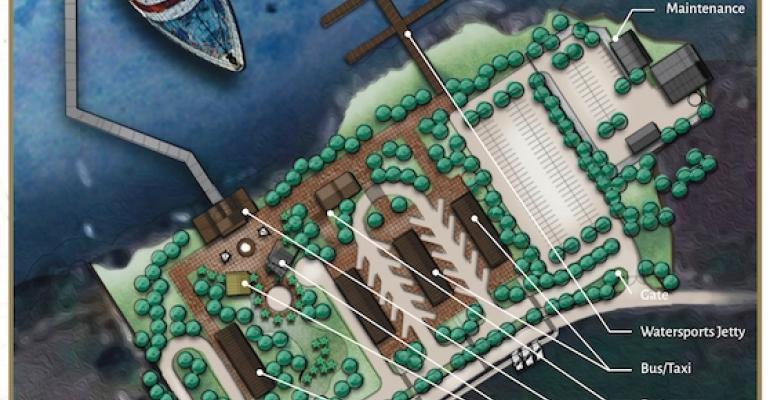 The Port Authority of Jamaica has contracted the floating pier system, SeaWalk, for use at historic Port Royal, opening the opportunity for cruise ships to visit this fascinating destination without impacting its fragile environment.

Located on Jamaica's south coast near the capital of Kingston, Port Royal is rich in pirate lore—it was known as 'the wickedest city on earth.' An earthquake in 1692 swallowed two-thirds of the town, forming an underwater city that is actively being investigated and preserved by the Jamaica National Heritage Trust. Port Royal also was home to the British Navy for 200 years, making it a treasure-trove of history.

'Port Royal is a very historic site, with a sunken city from 1692. It's a very fragile area and with SeaWalk we'll be able to develop it without having to dredge or drive piles,' Tatham said.

Further, SeaWalk costs half the price of a fixed pier and can be delivered in a short timeframe, he added, with ships expected to first be able to call at the floating pier in early 2019.

With the proximity to Kingston across a huge natural harbor and plentiful visitor attractions there, including the National Gallery of Jamaica, Bob Marley Museum and Blue Mountain Coffee plantation tour, there's plenty to see beyond Port Royal, too.

Cruise visitors could travel between Kingston and Port Royal by a short bus ride or, potentially, water taxis. And, thanks to Jamaica's newly completed north-south highway, passengers arriving at Port Royal could access north coast attractions like Dunn's River Falls in just 1.5 hours—less time than it takes to drive between Ocho Rios and Montego Bay.

Tatham said there's ample opportunity for private sector development in Port Royal under the direction of the Jamaica National Heritage Trust. The Trust has identified a huge sunken pirate ship and recovered thousands of artefacts, with plans to develop a museum to showcase them.

SeaWalk can handle very large ships but Port Royal is envisioned as a destination for smaller vessels.

'It's an exclusive port. It will only be able to take one ship at a time,' Tatham said. 'That way, Port Royal won't be overwhelmed.'

The contract is a 'big breakthrough' for SeaWalk in the Americas, according to Arthur Kordt, a partner in its Bergen, Norway-based parent company, Cruise Ventures. He noted that after the floating pier's first installation in Skjolden in 2012, more than 350 calls have been handled.

SeaWalk is also deployed at Geirangerfjord, a UNESCO World Heritage Site, while UNESCO designation is pending for the Underwater City of Port Royal.

Capt. Svein Sleipnes, who represents SeaWalk in the Americas and Caribbean, said the cruise industry has heard about Port Royal's potential for decades but it wasn't considered accessible because of the environmental fragility.

'It's going to be a unique destination,' he predicted.

Port Royal's SeaWalk system will be manufactured in Europe and shipped to Jamaica for installation in late 2018.

Cruise Ventures is talking with other ports in the Americas about how SeaWalk can meet their needs, Sleipnes said.

Ole Heggheim, chairman of Cruise Ventures, also noted the company is working on a big SeaWalk project in Greece, adding that the destinations can't be revealed yet.