Joe Farcus book 'Design on the High Seas' is out 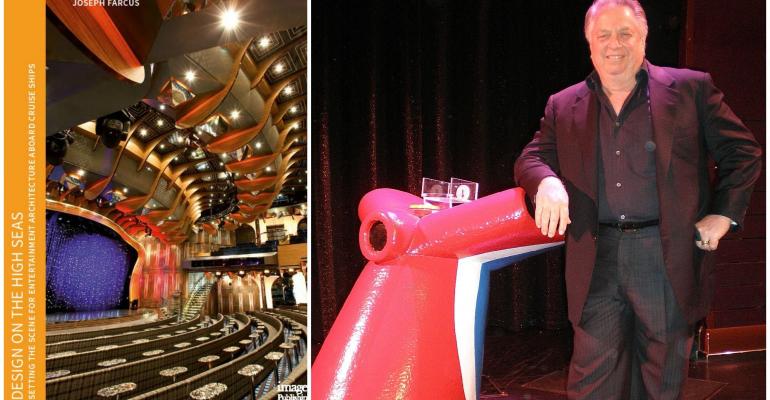 'Design on the High Seas,' left, has just been published. At right, Joe Farcus with the trademark Fun Ships funnel he designed for Carnival

'There is no individual who has had a more profound impact on cruise ship design,' Carnival Corp. chairman Micky Arison says in the forward to Joe Farcus's autobiography, 'Design on the High Seas,' just out from Images Publishing.

Rich in color photos, original sketches and a compelling narrative, the book traces the spectacular journey that made Farcus the most prolific cruise ship architect and spawned a new genre, 'entertainment architecture.'

'I was extremely lucky to have crossed paths with Ted Arison which led me to Micky Arison. They were my Medicis and their confidence and trust allowed me to develop my ideas to create the environment which led to the most successful cruise company in the world. I’m grateful and proud,' the author said.

'Design on the High Seas' tells what shaped Farcus's design philosophy while also chronicling the history and development of Carnival.

'Each ship and each public room aboard was different with unique expressions and ambiance,' Farcus said. 'In short, I wanted each design to be art, as I believe architecture is, and to have it be an important part of the product’s appreciation and success.'

World-renowned for his cruise work, Farcus has designed 50 ships, many as the sole designer and most for Carnival Cruise Line but also for Costa Cruises, Holland America Line and Cunard.

Perhaps his greatest distinction is original design, not derived or copied to follow trends.

'It truly set us apart from what everyone else in the cruise industry was doing,' according to Arison. 'Other cruise lines were basically building the same ship. Joe’s concepts for Carnival were entertaining and whimsical and he ultimately ended up coining the phrase ‘entertainment architecture’ to describe his unique style of design.'

For all these reasons, he considers Farcus an 'artist in the noblest sense of the word and a hands-on technician with a deep knowledge of cruise ship operations, shipbuilding, architecture, human nature and behaviors, materials, modern technology and innovations.'

Farcus was a licensed architect for a decade before he started cruise work. 'I knew what I was doing,' he said. 'I knew construction, electrical, how structures work. It's not just a matter of designing pretty forms.

'In designing a three-deck show lounge, you're working with structural engineers. So many times early in my career they would say "It can't be done." I would sit down with a pencil and show them the structure behind the wall. Once you show them how to do it, you get their respect.'

One design that will forever hold a place in cruise industry history is the winged funnel Farcus created for the Fun Ships. In the early 1980s, when Carnival was planning its first newbuild, Farcus proposed a stack with wing-like protrusions on the sides to carry engine exhaust out and away from the ship. This sparked heavy debate until a wind tunnel test proved the winged design was far superior to the conventional one.

Dazzling atriums are another trademark. Farcus didn't invent the multi-story atrium but he made them breathtaking.

'Design on the High Seas' is available to order from imagespublishing.com and Amazon.com and will be in bookstores.

Farcus is scheduled to speak at Miami's Books & Books on Jan. 6 at 4 p.m. Wine and hors d’oeuvres will be served.