John Delaney aspires for Windstar to 'own small-ship cruising' 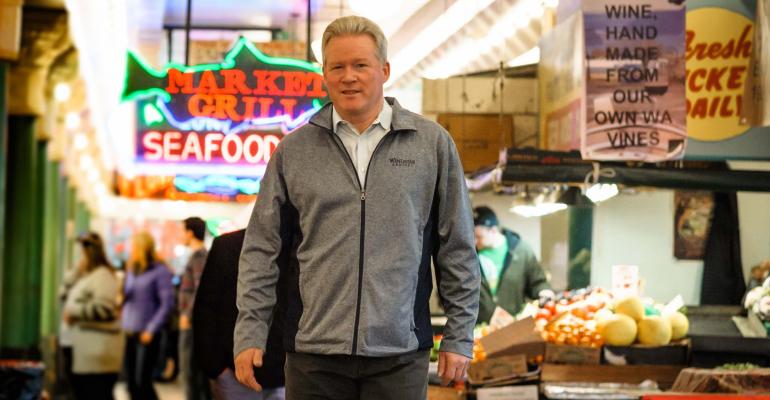 John Delaney at Pike Place Market, close to his Seattle home. He serves on the board of the Pike Place Market Foundation
Windstar Cruises president John Delaney sees 'huge potential in small-ship cruising,' especially as many lines that used to field small ships are going bigger.

'We have an opportunity to own small-ship cruising ... I don't see us as competitors in the ultra-luxury space or in the all-inclusive battle that's taking place. We can deliver a casual luxury, a more relaxed elegance,' Delaney told Seatrade Cruise Review in a profile interview.

For Windstar, 2017 is a year of destination enhancement with a whole new series of itineraries. Asia will be a focus, with calls in Vietnam, Malaysia, Singapore, Thailand, the Philippines, China, South Korea and Japan.

Also, Delaney is focused on distinguishing the 'Wind' sailing ships from the intimate, all-suite 'Star' ships. He thinks there's 'no more iconic way of seeing parts of the Mediterranean or the Caribbean or Tahiti than under sail.' The Wind ships are ideal for such warm weather destinations. The Star ships, meanwhile, are suited to regions like Asia, where Star Legend is going in a significant way in 2017/18, and cooler climes like Iceland.

For Delaney, it's important to grow Windstar's international distribution and travel agent network, too. The company is now live with Seaware, the Versonix reservation platform, and the UK is getting a regional sales director.

In a clear indication that Windstar plans to elevate its dining and service, Chris Prelog, a highly regarded, 18-year Seabourn veteran, starts as vp fleet operations in early January. Prelog and Delaney worked closely at Seabourn.

Windstar parent company Xanterra Parks & Resorts has poured $40m into the six Windstar ships, and president and ceo Andrew Todd has publicly stated intentions to grow the brand. Delaney said that's likely to be by acquiring rather than building because 'it's faster and there's good hardware available out there.' He's already reviewed proposals.