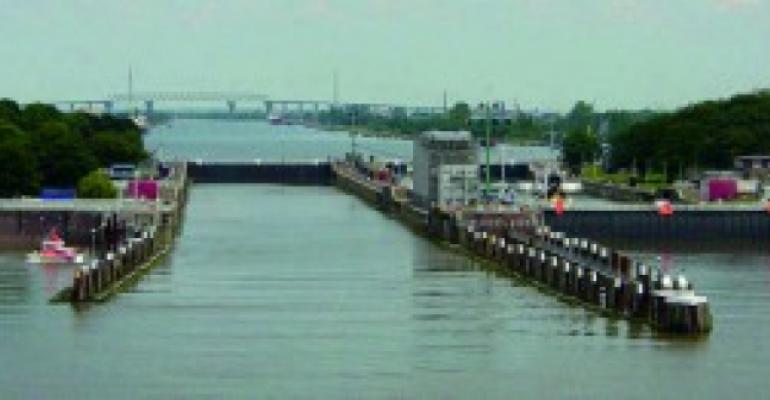 The Brunsbüttel locks of the Kiel Canal, the busy waterway linking the North Sea and the Baltic, resumed full operation Friday morning, ending capacity limits and wait times that impacted ships over the last year. Plus, new federal funding is supporting a major Canal upgrade.

Regularly transited by cruise ships, the scenic Kiel Canal is a highlight of sailings in northern Europe.

After two vessels crashed into the gates of Brunsbüttel's 'Big Lock' chambers in January and March, the capacity of Brunsbüttel's main locks had been reduced by 50% for nine months to allow repairs. With this work just completed, the Kiel Canal is now back to normal operation and has returned to its full capacity.

Moreover, Germany's federal Parliament's budget committee approved additional funding for the Canal in November. This supports a thorough upgrade, already begun, that entails constructing a new, fifth lock chamber at Brunsbüttel, modernising the opposite locks at Kiel, deepending the entire Canal and modifying the narrow 'Eastern Section' west of Kiel.

Additionally, the budget committee recently brought forward the construction of a new repair dock at Brunsbüttel. This will be used for maintenance and emergency repairs to the lock gates, and should drastically reduce down times after accidents like those in January and March.

While the construction of Brunsbüttel's fifth lock chamber is already under way, the remaining measures will be implemented gradually through the end of the 2020s.

Jens Knudson, chairman of Initiative Kiel-Canal e.V., the customers' and service providers' association, said he expects traffic volumes to return to the 2014 level during the next year. He forecast a significant increase in business with the future modernisation.

The upgrade should also further boost the Kiel Canal's attractiveness for cruise operators.