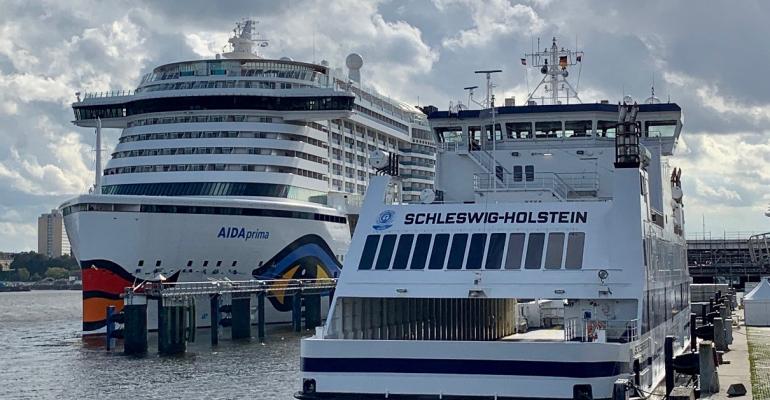 AIDAprima together with the ferry Schleswig-Holstein chartered for the Reunification Day celebrations at Ostseekai PHOTO: Wyker Dampfschiffs-Reederei

Ahead of the season's last cruise ship call this Saturday, the Port of Kiel said it will close 2019 with a spectacular 33.6% increase in passengers, exceeding previous results and the port’s own expectations.

In total, 174 calls carrying some 800,000 passengers were received at Kiel's terminals this year, up from 169 calls and 598,577 passengers during 2018. Turnaround passengers comprise the major share although Kiel is also receiving an increasing number of transit cruisers on partial turnarounds of, for example, MSC Cruises.

Dirk Claus, MD of the Port of Kiel, said the 2019 cruise season went well thanks to an excellent cooperation between the cruise lines and the port. He highlighted the flexibility required from all parties involved with regard to the ongoing construction work for the second terminal building at Ostseekai, as well as the extensive preparations for the Reunification Day festivities on Oct. 3.

These saw Kiel hosting the celebrations for Germany's national holiday. Some took place directly in front of the Ostseekai where a number of ships, both military and civilian, were involved.

Claus also highlighted the success of Kiel's extended facilities for cruise vessels at Ostuferhafen on the eastern side of the port. He said high customer satisfaction scores proved the quality and efficiency of the enlarged Ostuferhafen terminal which became operational in the spring and is able to handle ships exceeding 4,000 passengers. The Ostuferhafen facility is mainly used by MSC Cruises but has also hosted other lines.

Cold ironing to be fitted at Ostseekai

AIDAprima, which will make the season’s last call on Saturday, was among the ships received at the port for the first time this year. Other newcomers included Nieuw Statendam, Marella Explorer and Vasco da Gama.

During the coming winter Kiel is going invest further in its infrastructure: The second terminal building at Ostseekai —scheduled to be inaugurated earlier this year but it remains under construction — will be completed, and a new cold ironing plant is going to be installed, as well. Starting next spring, cruise ships docked at Ostseekai will able to receive shore power, along with the RoPax vessels of Stena Line berthing at the nearby Schwedenkai.

Up to 70 cruise calls targeted for shore power in 2021

It is expected that shore power will be supplied for 60 to 70 cruise ship calls at Kiel next year, contributing — together with the regular supplies to Stena's ships — to a reduction of 12,000 tons of CO2.

Kiel experienced occasional cruise protests this year, culminating in a blockade of Zuiderdam in June. These were sporadic and after the Zuiderdam incident no further ships were affected. Overall, the vast majority of Kiel's population continues to support cruise operations, which have added significant income to the entire Kiel region and created numerous new jobs over the past years.