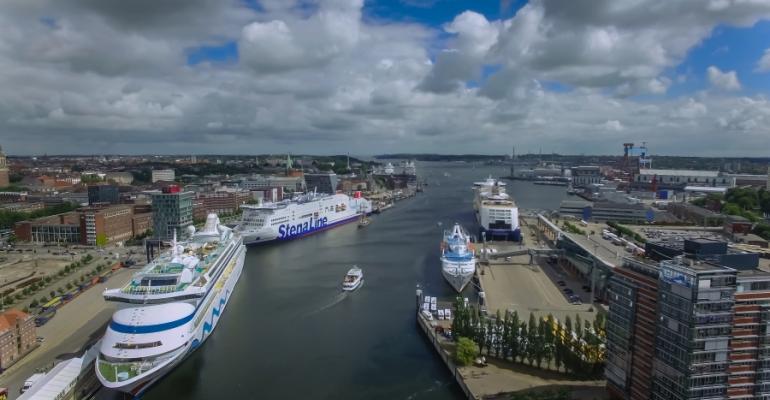 The Kieler Woche sailing regatta, under way in northern Germany, is turning into a big attraction for cruise ships and other vessels.

'The Kieler Woche is the absolute highlight of the cruise season, both as far as the number of ships and the number of passengers is concerned,' said Dirk Claus, managing director of the Port of Kiel. He added that on the opening Saturday, more than 22,000 travellers used the terminal facilities to board or leave ships.

The arrival of AIDAvita marked the 250th visit to Kiel by an AIDA ship and the occasion was marked with an on-board reception.

Other visitors this week include Arcadia on a maiden visit Wednesday Albatros on Thursday and AIDAluna on June 26. Holland Amercia Line's Zuiderdam joined the celebrations on Sunday.

On Thursday Mein Schiff 5, the most recent addition to the TUI Cruises fleet, is expected on her maiden visit.

'Kiel is the very first port of call for this ship after she leaves Meyer Turku,' Claus said. There will be a TUI fleet get-together on June 26 when Mein Schiff 1 and Mein Schiff 4 will berth together at the Ostseekai Terminal. The last cruise ship to visit the Kieler Woche will be Artania from Phoenix Reisen, which will be among the guests at a spectacular closing fireworks display.

A total of 23 cruise ships will make 144 calls at Kiel's three terminal facilities available for cruise ships and ferries at the Ostseekai, Norwegenkai and Schwedenkai and all close to the city centre. In addition, passenger exchanges take place at Berth 1 at the Ostuferhafen. This year more than two million passengers are expected to board or leave a ferry or cruise ship, some 450,000 of them cruise passengers.