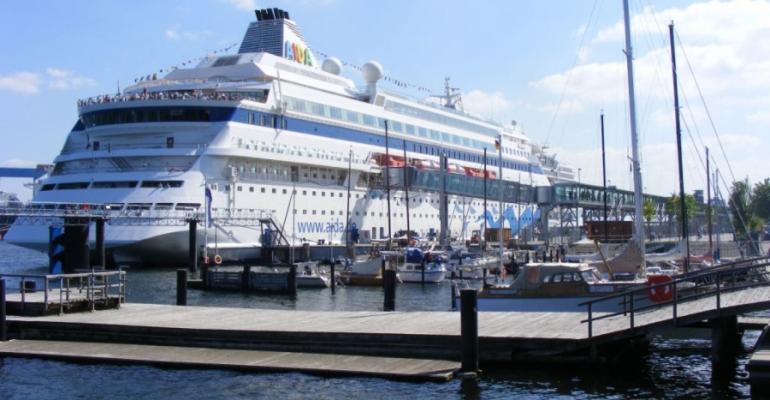 AIDAcara is scheduled to arrive at the German port of Kiel's Ostseekai Terminal Sunday, opening a long, busy cruise season when 127 calls by 23 ships are forecast.

'The trend towards ever bigger cruise ships continues,' said Dirk Claus, md of the Port of Kiel. He added that while the number of calls will remain at about the same level as last year, overall tonnage will increase significantly.

Kiel expanded terminal capacity again in 2014 with the introduction of the cruise Berth 1 in the Ostuferhafen, enabling three very large vessels to execute turnaround operations simultaneously.

In addition, smaller ships can use Norwegenkai and Schwedenkai terminals as well as the Sartorikai.

All cruise lines operating in the German market use Kiel, with AIDA Cruises the leading operator this year. For the first time, AIDA will position two ships—AIDAcara and AIDAluna—in the north German city for the entire season.

The most frequent caller will be MSC Orchestra with 20 cruises, and the largest ship will be the 114,000gt Costa Pacifica.

About two-thirds of this year's calls will be made by four lines: AIDA, Costa, MSC and TUI Cruises.

Saturday is the key turn-around day. On 12 occasions there will be three or four cruise vessels berthed at the port, in addition to Baltic ferries. Most cruises will begin at the Ostseekai Terminal, however Berth 1 in the Ostuferhafen will also host 19 visits.

'Our new Berth 1 is already being well-received,' Claus said. He added that ample parking slots are now available right at the terminal.

A highlight of the season will be Mein Schiff 4's naming on June 5 at the Ostseekai Terminal. 'We are looking forward to an unusual event which will be attended by a lot of spectators,' Claus said. Before that, TUI Cruises' newest ship will enter the Kiel Fjord for the first time on May 14.

A dozen cruise ships are expected during the big Kieler Woche maritime event from June 20-28, among them Sea Cloud 2, Astor and Amadea. Queen Elizabeth will visit on July 11 and Aug. 20, and Holland America Line's Eurodam has eight embarkations this season.

Capping a very long season will be the Dec. 19 call of Phoenix Seereisen's Albatros.