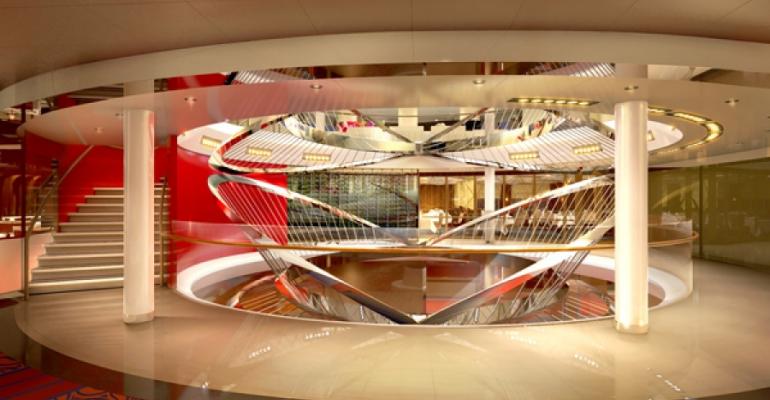 Koningsdam atrium - a space designed for interaction, with a central sculpture inspired by the lines of a string quartet
Holland America Line said its 2,650-berth Koningsdam will have interiors that blend 'fresh, contemporary styling in perfect harmony with the line’s renowned classic elegance.' Renderings of the designs, by Adam Tihany and Bjørn Storbraaten, were revealed in a microsite at www.hollandamerica.com.

Passengers will know they’re on a Holland America ship, 'but they’ll see we’re taking a forward-thinking approach to many of the design elements,' according to Stein Kruse, ceo of Holland America Group.

At the helm of the interior conceptualization is Tihany, regarded as one of the world’s pre-eminent hospitality designers. He approached the Koningsdam project with an eye toward creating public spaces that reflect HAL's tradition while elevating the design to strike a 'more modern balance of past, present and future.'

Focusing on fluid curves and graceful lines, light-filled spaces and the natural flow of public areas, Tihany’s metaphorical approach to the interiors was inspired by the 'architecture of music.'

'I was inspired by the thought of what you might see from the inside of a musical instrument, what the architecture of the surfaces and the geometry look like,' Tihany said.

Key to his concept is interaction, where people actively engage with the architecture rather than passively moving through it.

'The design isn’t a literal translation of music, but a conceptual approach where we seek to evoke the feeling and beauty of an instrument with graceful lines, dramatic textures, lighting effects and use of materials,' Tihany added. His inspirations were not only instruments, but also 'majestic spaces and exaggerating the feeling of height, so guests feel the grandeur of every room.'

For example, in the three-deck central atrium, an airy stainless-steel sculpture represents the synthesis of a string quartet. The experience changes as people move around and through the space, which is capped by a 'skylight' that's a backdrop for subtly changing high-definition projections. By day passengers will see wispy cirrus clouds floating in an azure sky or images of light in water. By evening, the atrium takes on dramatic lighting hues or reflects the constellations of the night sky.

The Queen’s Lounge has been completely re-imagined as an elegant theater and entertainment venue that also spans two floors. Tihany again drew inspiration from music, nodding to the sensual curves of a violin and featuring extensive use of wood, fluid waveforms and light. HAL said the lounge will showcase world-class musicians and have the largest dance floor on the ship.

The involvement of seasoned cruise ship architect Bjørn Storbraaten, who worked on Eurodam and Nieuw Amsterdam, ensures continuity of the HAL brand to Koningsdam while taking the design to the next level.

Storbraaten said it's been fascinating to work on Koningsdam, where design elements never before seen on HAL are being introduced: 'We were tasked with evolving the look and feel of the ship while keeping it true to the brand, making this an exciting and rewarding project.'

His design of the dome-covered central pool area, typically a single level on HAL ships, has been expanded to two levels to create a vast glass-enclosed space.

In addition to other areas, Storbraaten is designing the exotic look of Tamarind, the line’s Pan-Asian restaurant, that emphasizes nature’s basic elements: water, wood, fire and earth.

The Koningsdam microsite is here.