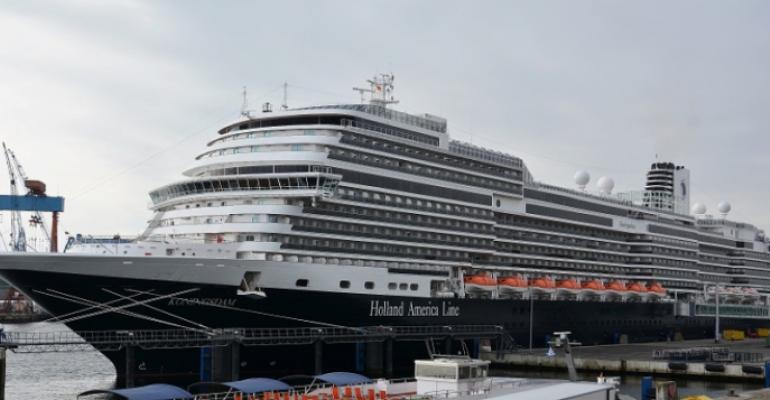 Koningsdam berthed at the Ostseekai cruise terminal this morning (PHOTO: Port of Kiel)

Holland America Line's Koningsdam arrived at the port of Kiel for her maiden call Thursday morning as part of a 15 day Baltic cruise.

Welcoming the ship, Kiel's city council chairman, Hans-Werner Tovar, stressed the importance of HAL as a client for Kiel Port.

For a decade Kiel has been pushing expand its transit calls, and Tovar said HAL has made a massive contribution to that end, now returning to the port for the eight consecutive season.

According to Tovar, seven calls of the Koningsdam and Zuiderdam are scheduled for 2016, with Kiel Port expecting to handle a total of 15,000 HAL guests.

While the majority of Kiel's cruise trade accounts for turnarounds, HAL uses the port exclusively for transit calls. Excursions departing from Kiel feature the city itself, the nearby Laboe seaside resort, Hamburg, Lübeck and the Holsteinische Schweiz landscape.

Koningsdam's visit today is the fifth and final maiden call at Kiel this year. As usual, a tugboat escorted the ship to her berth and a ceremony was hosted onboard the present the city's welcome plaque to HAL's newbuilt.