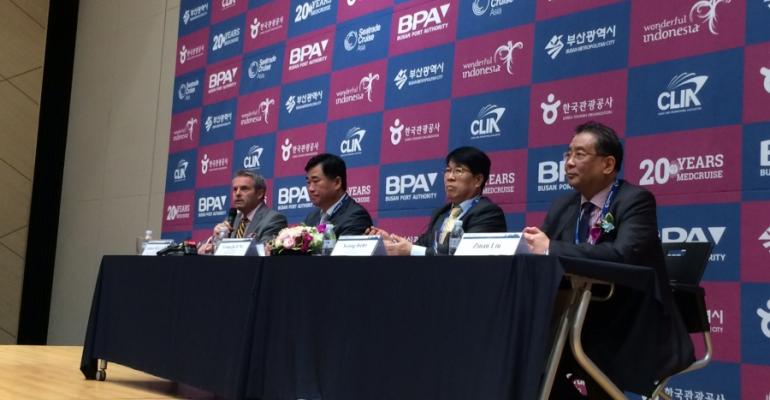 Korea in the spotlight at Seatrade Cruise Asia 2016 press conference

The Korean cruise industry is bucking the trend of general low economic growth and Busan, in particular, is seeing a wave of growth in the cruise industry commented Gyung-jin Jung, vice mayor, Busan Metropolitan City speaking at a press conference held as a curtain raiser to Seatrade Cruise Asia 2016, taking place at the new Busan International Passenger Terminal.

Andrew Williams, general manager, Seatrade, affirmed that the focus on cruise in Asia was timely given that it is the world's fastest growing market both now, and expected to continue over the next ten years.  Seatrade Asia 2016 itself is bringing together some 1,000 stakeholders from within and beyond Asia to the three day event, he commented.

In detailing Busan's growth, Ye-jong Woo, president, Busan Port Authority said it has seen exponential growth in the past year with some 250 more cruise ships call year-on-year, and has great potential to grow even further.  He said the vessel calls and deployments  are the fruition of plans and infrastructure development which have been in place over past five years. 2018 will see the completion of an extended cruise facility at Yeongdo Island.  Busan will then be able to accommodate any size cruise vessel.

'Between 2008 and 2014, cruise travel outpaced general leisure travel in the US by 22%,' said Liu. 'At the heart of this is the innovation of new experiences being offered to cruise passengers.' He said Busan is one of the most popular destinations for international cruise ships sailing in Asian waters and South Korea ranked number two in Asia’s top destinations list because of its culture, food, medical tourism and hospitality.

He pointed to the Korean government being one of the most proactive in promoting cruise. He observed that the government has effectively worked both at central and local levels, for instance to deregulate visa requirements for cruise passengers. ‘This has been both beneficial and encouraging for cruise industry development in the country.’