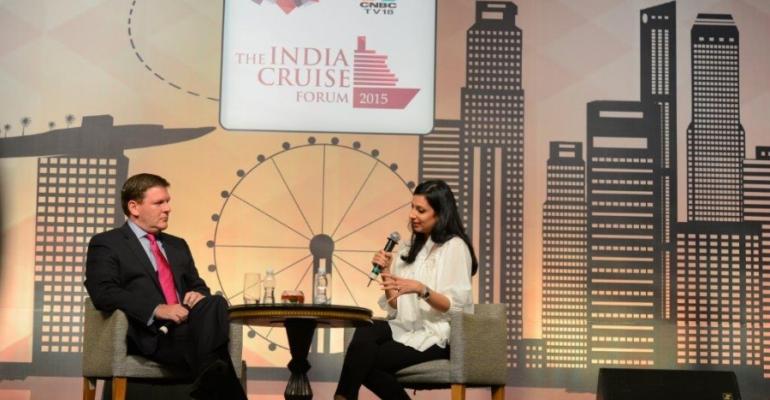 Hopes and passions ran high at the India Cruise Forum as cruise industry professionals spiritedly discussed how to encourage more Indians to take to cruising.

Gavin Smith, regional vp – Asia Pacific, Royal Caribbean International said it is important  to take advantage of Indians' interest in cruise in the market and make cruise relevant to the Indian traveler. ‘The industry covets India’, he stated, given its sheer demographic volumes.

Ratna Chadha, ceo, Tirun Travel Marketing; India Representative for Royal Caribbean Cruises  who has been in the business for over 20 years quipped, ‘since we do not have ships homeporting here, we consider Singapore as part of our country!’

Chadha said ‘it has been an uphill task’ to promote cruise to Indians, as cruise was seen the prerogative of the rich and famous with just 200 passengers 20 years ago, when there were various restrictions on foreign exchange and such.

‘It has grown now but numbers are not even the tip of the iceberg when it comes to the potential a country like India which recorded 15m general outbound travellers in 2013.’ Her rally call was to collectively help to expand the market.

Paul Chong, vp – business development, Carnival Asia said India is a market with huge potential, like China which is one of the largest outbound tourism markets in the world. ‘However, it is not a homeport market and ships are not deployed here due to many issues.’

He said as a result China is the game in town and will be for the next few years, he predicted (even though Smith countered earlier China is not the only game in town).

Chong outlined some of the success factors in China [which India does not have at the moment] such as a build-up of cruise infrastructure and ‘a clear commenality of purpose between the public and private sectors.’

Nalini Gupta, md, Lotus Destinations; gsa for Costa Cruises in India , said the cruise  business ‘is ready to explode in this country’. The masses and its various segments have not started cruising yet as till now it is still quite niche.’

She said the young in India are earning well and are postponing commitments to go out, spend and have new experiences. ‘They have the money and the will’ said Gupta. She is working with airlines to help promote fly-cruises.

The last discussion of the forum revolved around distribution.

Jennifer Yap, md – Singapore & Southeast Asia, Royal Caribbean Cruises said brand building is important in India.  ‘A large number of guest have never cruised before and first time cruisers sometimes do not understand what value proposition is offered onboard and travel agents need to help explain this beforehand.’

Naresh Rawal, vp sales - India, South Asia, Russia, Middle East and South Africa, Star Cruises said cruise lines need to understand the consumer and need to get the distribution right. 'We have had good trade partners who have helped us, he said explaining how Star Cruises has been able to tap the Indian market for some 18 years now. Replying to what had made Star Cruises pull out of cruising in India, Rawal said the main obstacle was and is taxes. He said they are still talking to the government and added, ‘there is currently a certain amount of dialogue with new government’ but was unable to give further details.

STB’s Lachmandas told Seatrade Insider, ‘Among the Forum attendees are those currently not selling cruises and we wanted them to understand its potential. For those who are already selling, we hope they will work closely with the cruise lines to intensify their efforts.’ He concluded, ‘we are encouraged to see everyone fully engaged and keen to grow the industry, asking questions and actively seeking information. It all augurs well for India's cruise industry moving forward and realizing some of its enormous potential.’