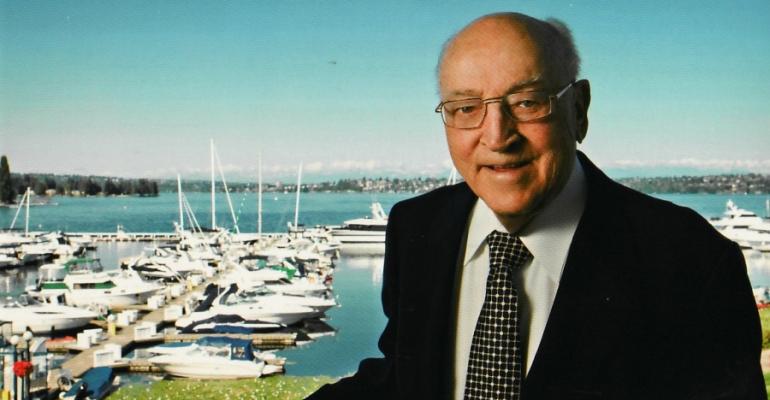 Stanley B. McDonald, who launched Princess Cruises in 1965 and is considered a father of modern cruising, died Thursday in Seattle. He was 94.

'We had a passionate founder, one of the fathers of cruising, who truly believed that travelers would be drawn to vacation on the high seas,' Princess president Jan Swartz said during the Nov. 5 christening of Regal Princess, which featured a video tribute to McDonald.

On Friday, Swartz said everyone at Princess is deeply grateful for his passion to create and grow the company, and 'happy we got to pay tribute to Stan just two weeks ago at the launch of Regal Princess and our 50th anniversary celebrations—and that he got to see the ceremony remotely.'

McDonald was 'an astute, skilled marketer' who established the platform for modern cruising on the US West Coast and opened Mexico and Alaska as key destinations, according to Rod McLeod, a veteran former senior cruise executive.

Princess was the first cruise line to run television advertising, and coined the term 'Mexican Riviera' to borrow the cachet of the French Riviera. It pioneered popular ports like Puerto Vallarta.

'Stan had a flair for promotion and "The Love Boat" was really a breakthrough,' said Mark Conroy, veteran senior cruise executive. He compared McDonald's accomplishments on the West Coast with those of Ted Arison for NCL/Carnival, Knut Utstein Kloster for NCL and Arne Wilhelmsen and Ed Stephan for Royal Caribbean on the East Coast.

McLeod thinks McDonald's embrace of Aaron Spelling's concept for 'The Love Boat' television series, after others steered clear, is 'deserving of legendary status ... Stan saw it as an opportunity and leveraged the show's popularity to position Princess Cruises as one of the fast evolving modern cruise industry’s iconic brands.' 'The Love Boat' benefited the fledgling cruise industry as a whole, McLeod said.

McDonald had reversed the decision of one of his executives, who turned down a producer's proposal to film a television series on board.

'It was "The Love Boat." We damn near threw it out the window, and they made the cruise industry jump ahead years and years in that one program,' McDonald said in the Regal Princess video tribute.

Perhaps because of his West Coast location, in recent times McDonald has been not as well recognized as some of the colorful characters in the South Florida cruise industry, according to Mike Driscoll, editor of Cruise Week. He hailed McDonald as 'one of the true pioneers in the modern-day cruise business.'

As a young reporter, Driscoll saw McDonald as 'always approachable.' And he said over the years, Princess kept that approachability and distinctive West Coast style. The line has always provided a comfortable, relaxing way to see the world, whether in its roots offering a short hop to Mexico or its spread to the far corners of the world.

'Refined, yes, but not in a snobby way,' as Driscoll put it. Plus, 'The Love Boat' was a 'very inviting way to experience cruising, with humorous, gracious and friendly people on board as the norm, not the world's wealthy families.'

McDonald called the company after its first ship, Princess Patricia, chartered from the Canadian Pacific Railroad. He liked the name 'Princess' and felt it conveyed quality.

McDonald was a Seattle businessman who had founded a firm that was transporting equipment for the 1962 Seattle World's Fair. Since the city didn't have enough housing for the event, he chartered the Yarmouth as a floating hotel, bringing the ship to the West Coast from the Caribbean. It was packaged as a cruise from San Francisco to Victoria, BC, with four days in Seattle during the fair. The starting price for the 10-day round-trip was $195.

'This was a howling success,' McDonald said in the Regal Princess video. 'I saw that people loved to cruise.'

Jets had just come in; before that, ships were mainly for transportation. So he searched for a vessel and Princess Patricia began sailing in 1965 to Mexico.

The cruises were so popular that McDonald added Princess Italia in 1967. It was being built in Italy for an owner who went bankrupt; McDonald arranged to take over the vessel, which had an innovative design for the time. The lifeboats were positioned lower, freeing the upper decks, and the engines were in the rear, which gave room for spacious public areas.

Identical sisters Island Princess and Pacific Princess (built for Flagship Cruises as Sea Venture and Island Venture)—the 'Love Boats'—came in 1974 and a year later McDonald sold the company to Peninsular & Oriental Steam Navigation Co. He stayed on to run P&O North America until 1980.

In the Regal Princess video, McDonald recalled how he'd paid about $50,000 for the line's iconic Seawitch logo, 'and I would say it's worth millions of dollars today.'

Julie Benson, vp public relations for Princess, wrote and directed the video tribute which she called 'a labor of love,' adding 'I'm quite proud I could do this for him, his family, and for Princess.' The video is posted on YouTube, and a 2005 conversation with McDonald is available here.

McLeod applauded Princess and Carnival Corp. for recognizing McDonald's contributions and expressed the hope the industry as a whole would do the same. That sentiment was echoed by editor Driscoll, who said: 'He left a unique legacy in this business and it was wonderful to see Princess honor him so meaningfully on the Regal Princess.'

McDonald went on to run other businesses but has always said that founding Princess Cruises was his proudest and most enjoyable moment.

He is survived by his wife Barbara, a son, a daughter and grandchildren. Son Kirby and daughter Laurie McDonald Jonsson co-founded Sundance Cruises with their father in the mid-1980s. That was later merged with two other lines into Miami's Admiral Cruises, which was acquired by Royal Caribbean in 1988.