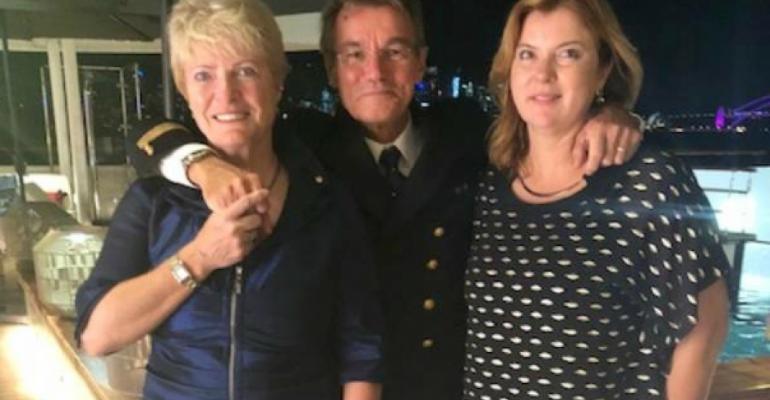 Sarina Bratton, left, and Asia Pacific vp Monique Ponfoort with Capt. Jean-Philippe Lemaire aboard Le Lapérouse in Sydney on Friday night PHOTO: Brook Turner
On Friday night dinner guests were transferred by tender from the Man O War Steps next to the Sydney Opera House to Le Lapérouse, anchored in the harbour, just off Point Piper.

Ponant’s Explorers-class, yacht-like ship, which has just 92 staterooms, was making her debut in Sydney after sailing down the east coast of Australia from Cairns on the inaugural chairman’s cruise.

Asia Pacific chairman Sarina Bratton was on board to host a magnificent sit-down dinner for repeat passengers, travel industry partners and media representatives.

During the evening guests were taken on a tour of the super-chic French-flagged ship and were shown its pièce de résistance—Blue Eye, the world first multi-sensory underwater lounge.

Le Lapérouse sails Saturday for Auckland where she will undertake a series of cruises around New Zealand.

On April 7 she sails from Auckland to New Caledonia, then Vanuatu and the Solomon Islands.

On May 1 she sails from Honiara back to Cairns via Papua New Guinea and from there heads to Darwin for an extended Kimberley programme between Darwin and Broome.

On August 31 Le Lapérouse departs Darwin for Indonesia and her repositioning voyage to Hong Kong.