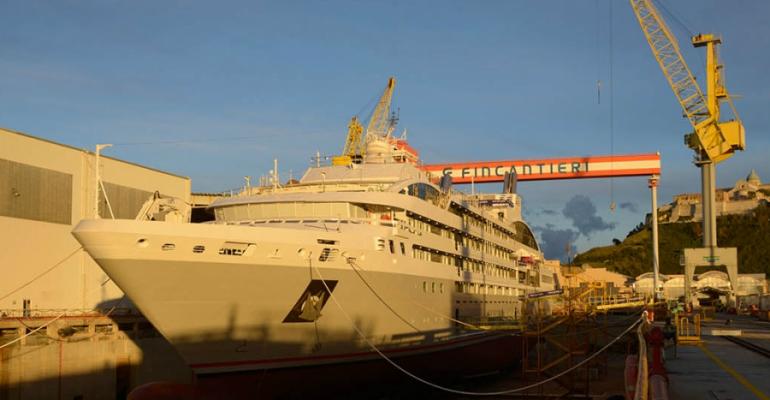 Ponant’s Le Lyrial, due to debut in spring 2015, was launched today at Fincantieri’s Ancona shipyard.

The ceremony was attended, amongst others, by Jean-Emmanuel Sauvée, ceo of Ponant, Véronique Saade, the company's deputy ceo, and for Fincantieri by Giovanni Stecconi, the Ancona yard manager. The ship's godmother was Virginia Gohagan, Thomas P. Gohagan’s wife, ceo of Thomas P. Gohagan & Company, a long-standing travel agency in Chicago.

The new ship, which will fly the French flag, is the fourth sister ship following L'Austral, Le Boreal and Le Soleal, delivered in May 2010, April 2011 and June 2013 respectively.

At 11,00gt, Le Lyrial is approximately 142mtr long and 18mtr wide. Passenger capacity is over 260 guests, accommodated in 122 cabins, deluxe suites, privilege suites and grand privilege suites, all with a sea view and 94% with a private balcony.

The ship is equipped with technologies to reduce environmental impact and for energy saving and has been certified under Bureau Veritas’ Comfort Class.