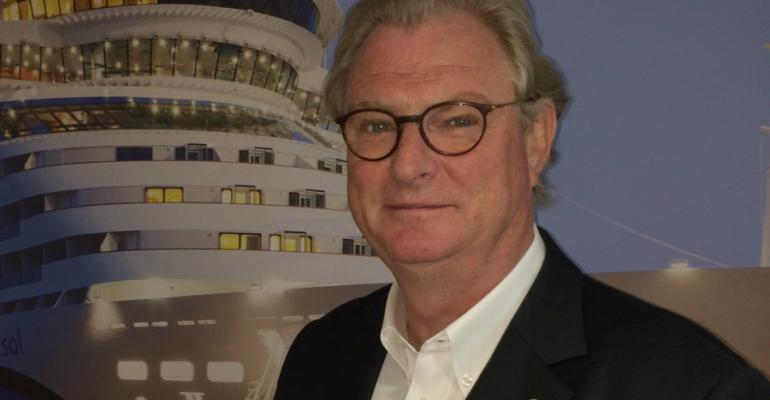 ‘We have come a long way since the gauntlet was laid down', the evp of Carnival Maritime told Seatrade Cruise News in an exclusive interview a few weeks back.

At the start Lassen worked with a project team of external experts and consultants. 'We had no office: now we are sitting in newly renovated offices in Hamburg port’s Haven City area, with 150 employees onboard: 40 from AIDA in Rostock, 40 from Costa in Genoa and the remainder all new recruits, some who worked previously with me,' he remarked.

CM consists of three divisions: an analytics and reporting centre, a fleets ops centre and a communications department.

'For any business to be successful it needs to by smart and automated,' says Lassen. He calls the fleet ops centre,  'the most forward thinking part of this initiative' Lassen has big plans to develop it future. It looks after the day to day compliance, medical, security, HESS, accident investigation, flag relations for 25 ships plus six newbuilds.

A fleet of 25 ships is 'not daunting' for Lassen who has worked in the maritime industry all his career.

His most recent post before joining the cruise sector was overseeing 120 container ships.

And he knows shipping inside out having started as a newbuilding surveyor for class society Det Norske Veritas and spent ten years in Asia ending up as principal surveyor in Hong Kong.

The next decade saw Lassen return to his native Norway working for V.Ships Oslo with the fleet growing from 12 to 60 ships when he left in 2000. ‘It was a good learning curve: as a ship manager you have to be creative’.

Then came his first foray with the cruise industry and a five year stint with Royal Caribbean working with Harri Koulavara and then back to general shipping looking after 130 tankers for Stolt Neilsen.

He then went to work for Ulstein for two years, followed by Rickmers in Hamburg which he 'turned round inside just over two years' before moving to AIDA in 2013.

'I have the ability to work on the steep side of a learning curve and after 30 years in the shipping sector I have enjoyed building up something with CM using all my experiences.'

Whilst Lassen admits its been challenging, ' it has been a positive experience and intellectually stimulating,' he remarks adding his boss Thamm, 'has been very supportive and let us get on and recruit some very good people.'

Our goals are to reach airline safety standards across the fleet, to lower costs and achieve higher efficiencies by end 2017.

Propel hones in on market developments, the impact of future regulations and client expectations, as well as the application of new technologies as important factors for making the right choices for new buildings and existing fleets.

'Safety management is not just about ticking the boxes, its about leadership,' commented Lassen whose team has been working closely with Propel's Dr Torkel Soma, a naval architect  and industrial psychologist  with comprehensive experience in organizational reliability, risk management, safety performance, safety culture and leadership.

Lufthansa Technique, which has experience of maintainence of aircraft spare parts, undertook a study of the CM ships and local offices in Genoa, Rostock and Shanghai and shared recommendations about reconditioning of spare parts and management of marine spares storage.

Lassen estimates there are about €100m worth of spare parts across the fleets, yet probably we only manage to use 50%.

A database is being built listing an inventory of all those spare parts and where they are located. 'In the airline industry they have every single spare for each aircraft and can deliver it anywhere in world within 24 hours and are trying to get that time down to 12 hours.'

'There are about 20% critical spares that we would still carry on each ship but the remainder could be warehoused somewhere, or in a few locations around the world, that could be easily delivered to a ship in time and that would bring huge savings across the fleet,' he said.

Another area we can learn from the airline industry believes Lassen,  is they recondition a lot of electronic parts whereas the shipping industry tends to have a use it and throw it away mentality: its not cost effective and its not environmentally freindly either, he stated.

On fuel and energy consumption: 'we need to be green, and be mean', he affirms. 'Huge savings can be made in this area and it's not rocket science: we run cars on propane gas, in our power stations and it is used in our homes and restuarants', he added. 'AIDA is leading the way on LNG powered cruise ships. It is the future and I applaud those in our company who took the decision to build those ships.'

All the AIDA and Costa ships' ISM certificates have been transferred to Carnival Maritime and all shipmangement is now firmly in-house under one umbrella. Lassen does not dismiss the idea of other Carnival Corp brands coming into the set up at some stage in the future.