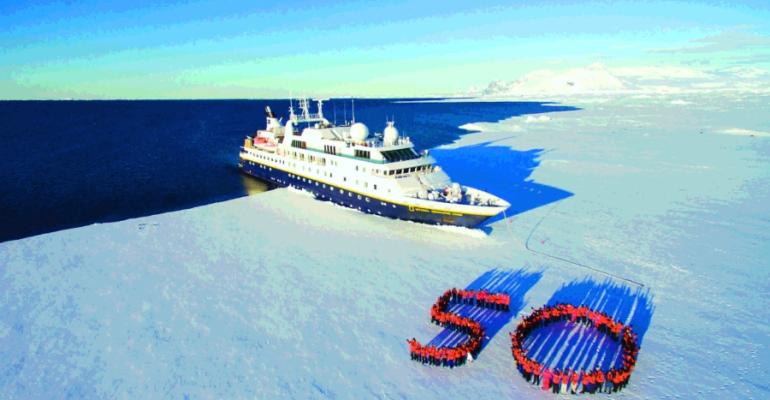 In 1966, Lars-Eric Lindblad made history when he took 57 intrepid travelers on the first ‘citizen explorers’ cruise to Antarctica, previously the exclusive province of professional explorers and scientists. Jan. 23 marks the exact day they stepped off the ship and into history at Smith & Melchior Islands on the Antarctic Peninsula.

For this, Lindblad was heralded as the ‘father of ecotourism.’

He invented the category of ‘expedition travel,’ and created a model of exploration that Lindblad Expeditions follows today. Fifty years later, under the direction of Lars-Eric’s son, ceo and founder Sven Lindblad, the company is guided by Lars-Eric’s belief that visiting the planet’s remote wild places would make advocates for preserving and protecting. His legacy is honored and sustained in the company's commitment to conservation through the Lindblad Expeditions-National Geographic Fund.

Throughout the year Lindblad will celebrate Lars-Eric’s vision and courage. The commemoration will include the publication of an updated edition of his book, ‘Passport to Anywhere,’ that charts expedition travel from 1966.

Also, travelers to Antarctica in the 2016/17 season will receive a vintage-style parka, with a limited edition 50th Anniversary patch, inspired by the sterling silver pin created by Lars-Eric for his Antarctic guests many years ago.

Antarctica expeditions on National Geographic Explorer will feature a roster of Global Perspectives Speakers including some of the greatest names in polar exploration.

Other special activities and programs are being planned and will be announced throughout the year.

Lindblad Expeditions 2016/17 Antarctica expeditions include the 14-day 'Journey to Antarctica: The White Continent,' with rates beginning at $13,360 per person, double occupancy in a Category 1 cabin, and $22,430 for the 24-day 'Antarctica, South Georgia and the Falklands.'