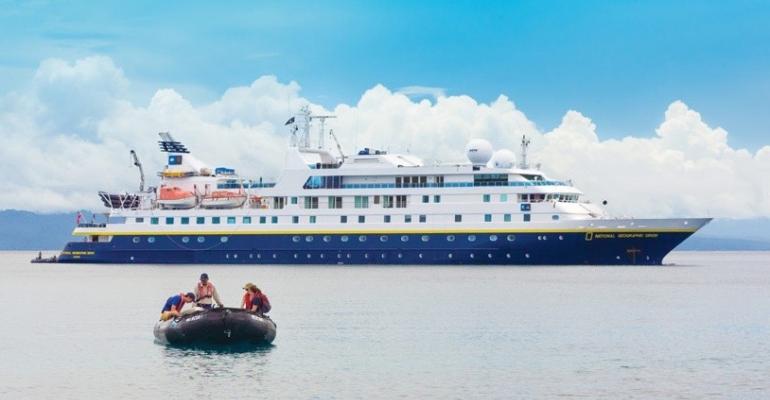 National Geographic Orion - engine problem impacted Q4 and will affect Q1, also. The ship is due to resume sailing in April
Though Lindblad Expeditions' tour revenues spiked 21% following its acquisition of tour operator Natural Habitat, the company's fourth quarter loss widened on costs and lower occupancy due to a ship's engine problem.

2017 is 'off to an extremely good start,' however, and the company expects to meet its long-term forecasts, said Sven-Olof Lindblad, president and ceo.

Bookings have been strong since April and continued 'very, very strong' in the new year. While Q1 is likely to be down year-over-year because of missed voyages by National Geographic Orion—which is on schedule to resume service in northern Europe in April—projections for the balance of the year are up.

Q4 tour revenues rose $9.7m, to $56.1m, thanks to contributions from Natural Habitat, acquired in May 2016. Lindblad segment revenues of $41.9m were 10% lower due to a $4.2m decline in ticket revenues as higher pricing across most itineraries was more than offset by lower occupancy and the cancellation of a National Geographic Orion voyage in Antarctica due to an engine problem.

Lindblad segment net yield fell 12%, to $872, compared with the same period a year ago, mostly because occupancy declined to 86.3% from 93.3% in Q4 2015. The company attributed the decrease to lower bookings during the first half of 2016 over concerns about the Zika virus and terrorism and a slowdown in activity on National Geographic Endeavour in anticipation of the launch of National Geographic Endeavour II in December.

Since the company's booking window is about nine months, the early-year worries about terrorism and Zika impacted demand for trips in the second half.

Available guest nights increased 1% from Q4 2015, primarily due to the launch of charter expeditions in Cuba, partially offset by the voyage cancellation on National Geographic Orion.

Adjusted EBITDA of $1.5m was down from $4.7m in Q4 2015 due to a $6.2m decrease at the Lindblad segment, partially offset by $3m of contributions from Natural Habitat. The Lindblad segment decline primarily reflects the lower revenues, increased personnel and marketing costs related to a fleet expansion as the company executes its long-range growth plan.

For the full year tour revenues rose 15%, to $242.3m, mainly on the contribution of Natural Habitat. Lindblad segment revenues of $207.8m were down 1% compared to 2015, due to a $2.2m decrease in other tour revenues. Ticket revenues were in line with a year ago as higher pricing across most itineraries was offset by a slight decline in available guest nights and occupancy.

Net income for the full year was $5.1m, or 10 cents per share, down from $19.7m, or 43 cents per share, in 2015. Full year 2016 results include an additional $6.8m of depreciation and amortization and $1.2m of other expense mainly related to the retirement of the National Geographic Endeavor. Full year 2015 results included $13.3m of merger-related expense and $12.5m of pre-tax income from the July 2015 merger with Capitol Acquisition Corp. II.

Full year adjusted EBITDA of $41.7m decreased 11% compared to 2015, due to an $8.2m decrease at the Lindblad segment, partially offset by a $3m contribution from Natural Habitat. The Lindblad segment decline reflects slightly lower revenues in 2016, and higher personnel costs for accelerated hiring in support of the company's long-range growth plan.

Additionally, 2016 results included legal and administrative costs associated with a full year of operations as a public company and higher cost of tours, mainly due to higher planned drydock spending, partially offset by lower fuel costs.