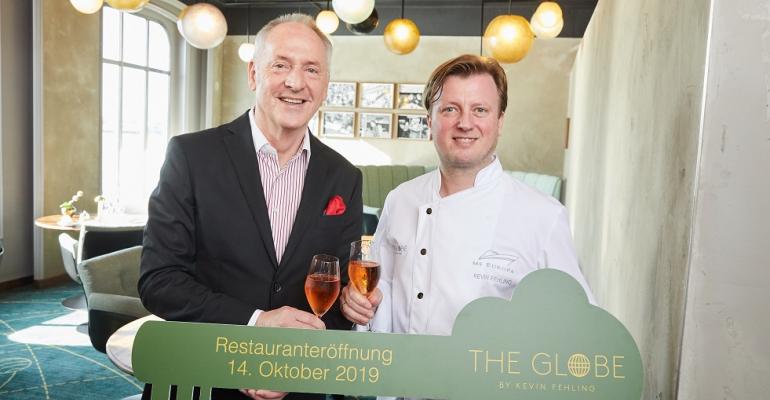 In Lisbon, Hapag-Lloyd Cruises presented the restyled Europa, whose new features include The Globe restaurant, opened by CEO Karl J. Pojer and chef Kevin Fehling last week PHOTO:Hapag-Lloyd Cruises/Christian Wyrwa.
With Europa 2, Europa and Hanseatic Inspiration all in Lisbon today, Hapag-Lloyd Cruises took the opportunity to host a ‘Top Partner Event’ for 130 travel agents and let passengers on each ship visit the others.

Europa has just emerged from an upgrade in Hamburg while Hanseatic Inspiration is on its maiden voyage.

Exclusive concert in Convento do Beato

Hapag-Lloyd Cruises also used the gathering of three of its five ships to offer an exclusive concert for the approximately 1,000 passengers in Lisbon. Gregory Porter, an American singer, songwriter and actor, was scheduled to perform Tuesday night in the Convento do Beato.

Apart from showing off the newly inaugurated expedition ship Hanseatic Inspiration, Hapag-Lloyd Cruises used the occasion to present the restyled Europa, which returned to service last week following an upgrade at Blohm+Voss.

During that two-week renovation, the décor was updated, and an open-seating dining concept and more casual dress code were introduced, along with two new restaurants and a new well-being concept.

The Globe by Kevin Fehling replaced the Dieter Müller Restaurant, while The Pearl was added as a new dining venue. Fehling, who is going to sail on Europe for 20 days a year, worked on the ship as a sous chef at the beginning of his career.

Now a three-star Michelin chef, he adds a new culinary dimension to Europa by presenting modern and creative dishes inspired by its far-flung ports.

The Pearl, added astern on Deck 7 with an outdoor terrace, offers caviar dishes along with other modern culinary experiences from around the world.