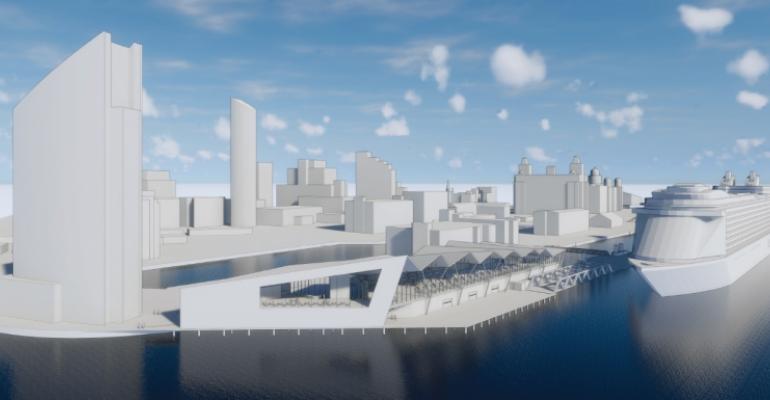 First design and operational details of Liverpool’s ambitious plan for a purpose-built turnaround facility with capacity for 3,600 passengers have been revealed to Seatrade Cruise News. Documents show the challenge and complexity of building the UK’s newest cruise terminal.

The £50m (US$66m) project will utilise the port’s existing 10-year-old floating pontoon for berthing, with the proposed new terminal development split across two adjacent sites divided by a public highway.

The combined sites comprise a transport hub and a two-storey terminal to be built on a new deck mounted on piles sunk into the bed of the River Mersey.

Nearby commercial and residential blocks are served by the road between each element.

The development team hopes to include a 200-room hotel within the plot earmarked for the transport hub. A long stay car park could be built at another site, served by shuttle buses.

At the transport hub, current plans show short stay parking for 59 cars, a shared car/taxi drop off zone for 12 vehicles, three shuttle bus spaces and eight coach bays. A further 12 coach bays are planned immediately outside the new terminal on the opposite side of the road to the hub. It is envisaged the road will remain open during ship operations with a marshalled crossing point.

Although built over the River Mersey, the new terminal remans static and is connected to the floating pontoons by a 90-metre link span bridge carrying both pedestrians and vehicles.

Under submitted plans, no provision is made for any boarding bridge installation, although designers note an airbridge could be added at a later phase, providing a totally enclosed passenger route from terminal to ship with access via higher decks and into atrium and grand lobby areas. In the proposed installation, passengers will remain on the pontoon level until they reach the ship’s gangway, embarking via lower decks.

Officials intend the application to be considered by the Planning Authority at a meeting in January. Subject to all consents and budget approval, work could start mid-2018 and see Liverpool’s new terminal open for business in 2020.