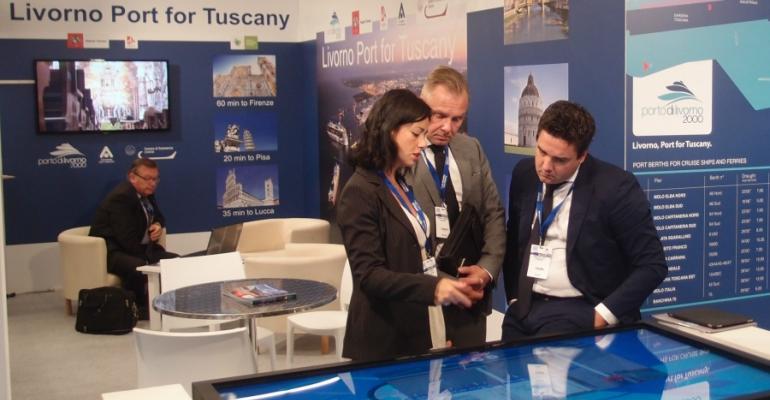 Following the inauguration of a new 3,000 sq mtr cruise facility at Alto Fondale quay last November plus 11,000 sq mtr additional space, this season the terminal has been handling ships over 300mtr long and conducting partial and full turnarounds for up to 2,500 passengers, said Roberto Piccini, president and ceo of Porto di Livorno 2000.

The port also handles cruise ships at Porto Mediceo terminal for vessels up to 200mtr and 7mtr draft, and at Molo Italia pier, which can accommodate ships up to 350mtr with a 12 mtr draft on the southern side. However, this latter facility is mainly used for commercial shipping.

Dredging of the north side of Molo Italia is starting in the coming days he said, which will be completed at the beginning of 2015.

‘This will make space for us to move the remaining commercial shipping activities from Alto Fondale quay, enabling us to expand  the area dedicated to cruise activities.

With finished, Alto Fondale will offer a 750mr dedicated cruise berth capable of accommodating two ships up to 11.8mtr draft.

At the same time work will start on expanding the passenger and services facilities on the same pier,’  Roberto Piccini, president and ceo of Porto di Livorno 2000 cruise terminal told Seatrade Insider.

Additional berthing for cruise ships is now available at Quay 75 which has recently been dredged and can host cruise ships up to 260mtr long with a maximum draft of 8mtr’, said Livorno Port Authority general director Massimo Provinciali.

‘In 2016, Livorno Port Authority will also begin work on creating dedicated berthing for cruise ships at Calata Orlando quay (on the opposite side of Alto Fondale). Dredging and re-profiling the pier-head will allow vessels up to 350mtr long to safely manoeuvre for berthing’, said the Port Authority representative.

With the completion of these activities, Livorno Port will boast two cruise terminals and berths: one capable of handling up to three megaships simultaneously (two plus another on the opposite side), plus Molo Mediceo for ships up to 200mtr long plus one dedicated pier exclusive to cruise traffic.