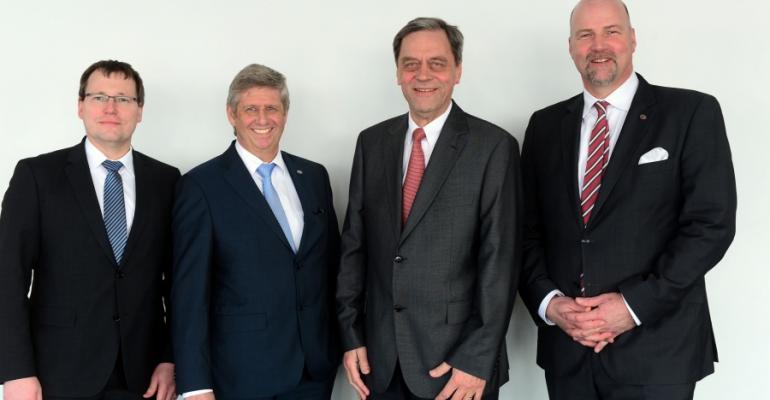 The Lloyd Werft Group managing board now comprises Rüdiger Pallentin, Carsten J. Haake and Dirk Petersjohann, as well as new hire Laakso, a shipbuilding and mechanical engineer. He will have offices both at Bremerhaven and Wismar bringing cruise ship experience where at Schichau-Seebeckwerft he was involved in the construction of Costa Victoria and Norwegian Sky, and at Meyer Werft, in newbuilds for A-Rosa Flussschiff GmbH and Royal Caribbean International.

The new Lloyd Werft Group, combining the three yards of Wismar, Warnemünde and Stralsund with Lloyd Werft in Bremerhaven, has now more than 1,700 employees. Nordic Yards' staff, comprising approximately 1,400, are to be retained.

The newly acquired yards' focus will be shifted from renewable energy projects – Nordic Yards recently tried to gain a leading position in the construction of transformer station platforms for offshore wind farms – towards cruise ship construction.

Nordic Yards, until last week controlled by Russian investor Vitaly Yusufov, comprises yards with a colourful history since the collapse of the German Democratic Republic in 1990.

The yards in Wismar and Warnemünde were established immediately after World War II, in 1946, mainly to serve Soviet needs in the territory which became GDR three years later.

As VEB Mathias-Thesen-Werft Wismar and VEB Warnow-Werft Warnemünde, both yards constituted part of the state-owned Kombinat Schiffbau and were cornerstones of shipbuilding in GDR. Nordic's third yard at Stralsund was likewise established after World War II, though on the roots of a dispossessed former private yard, Kröger-Werft. As VEB Volkswerft Stralsund, this yard likewise formed part of Kombinat Schiffbau.

After the German reunification, all three yards were privatised and subsequently shifted hands on several occasions. The yards at Warnemünde and Wismar came into the hands of Aker and subsequently Wadan, but Wadan Yards Group AS filed for insolvency in June 2009.

Subsequently, Yusufov took over control of the yards in Wismar and Warnemünde. The two yards concentrated on special-purpose ships since, acquiring among others contracts for a tanker suited for Arctic operation as well as two ice-breaking salvage vessels. Additionally, attempts were made to acquire transformer station platform contracts, responding to the establishment of offshore wind farms both in the Baltic and North Sea.

During its spell as Aker MTW, the Wismar yard obtained experience in cruise ship component supplies when building the new midship section for Norwegian Majesty and the hull for Norwegian Sun in 1999 and 2000.

VEB Volkswerft Stralsund, previously specialised in building trawlers, became briefly part of, among others, Bremer Vulkan after the reunification before it came under the umbrella of A. P. Møller-Mærsk for about a decade between 1998 and 2007. The yard then came under the control of Detlef Hegemann before turning into a part of P+S-Werften as from 2014. This group filed for insolvency in 2012.

Two years later, the Stralsund yard was merged with the yards at Warnemünde and Wismar into Nordic Yards under the control of Yusufov. The Stralsund yard has some experience in passenger shipbuilding, having delivered the Hurtigruten vessels Kong Harald, Richard With and Nordlys in 1993/94 as well as a series of TwinCruiser river ships for Premicon AG as from 2010.

An attempt to build two RoPax ferries for Scandlines AG ended in a disaster, as none of the two ships complied with contract specifications. Initially scheduled for inauguration in 2012, the ships are currently under reconstruction in Denmark and scheduled to be inaugurated by Scandlines this year. Most recently, the Stralsund yard has been working on a series of Artic cargo vessels as well as two RoRo vessels for Danish DFDS.

Genting's acquisition of Nordic Yards has been widely appreciated in Germany. Harald Ruschel, chairman of the workers' committee at Warnemünde, described the acquisition as 'a new chance for the yard', while Harry Glawe, mnister for the economy of the state of Mecklenburg-Vorpommern, said Genting's arrival was good news for all employees and their families. Workers' committees and politicians praised the fact that Genting is not only acquiring the yards, but also bringing in new orders.