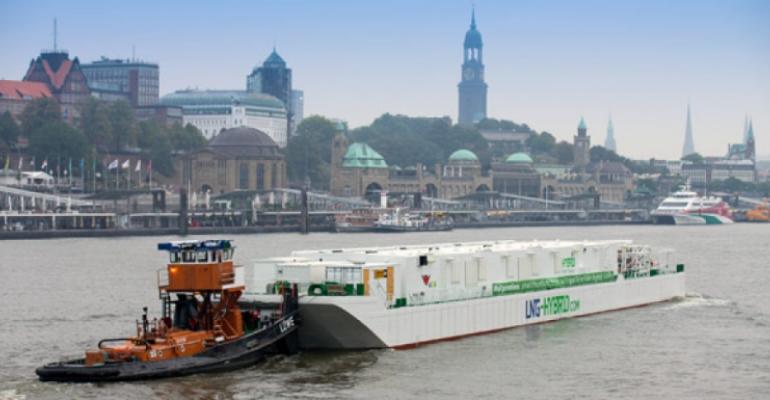 As part of the inaugural event, the plug connection between the LNG hybrid barge and AIDAsol was successfully tested.

It is planned to start supplying AIDAsol next spring with electricity produced from liquefied natural gas while it is berthed in the Hamburg.

AIDA's president Michael Ungerer stressed that with this pilot project, Becker Marine Systems and AIDA Cruises were setting an example for the entire maritime industry: ‘With the LNG hybrid barge, we have again demonstrated that environmental protection and economic interests are not a contradiction for us.’

The German Shipowners' Association, VDR, called Hummel an important contribution to the reduction of shipping emissions in port.

VDR's ceo, Ralf Nagel, called on the establishment of LNG terminals as well as public funding of the necessary shipside investments in order to help LNG to a breakthrough as ship fuel.

Work on the LNG barge project has been going on for about two years with planning and building costs understood to be in the region of €13m. Construction of the barge, which has no propulsion itself, took place at SAM Shipbuilding and Machinery in Komárno, Slovakia. After a technical launch on September 5, the barge was taken on a 1,500 km journey up the Danube, Main and Rhine rivers, arriving in Hamburg on October 4. Technical testing and commissioning subsequently took place at Blohm + Voss.

Equipped with five generators having an overall output of 7.5 MW (50/60 Hz), Hummel is 76.7mtr long and a draught of approx. 1.7mtr. Its generators are the first marine classified LNG Caterpillar engines to be delivered.

As Hamburg is lacking an LNG terminal at the moment, the barge's fuel has to be transported to the city from Rotterdam.

Studies show the application of LNG contributes to a significant reduction of emissions and particle discharge. Compared to the use of conventional marine diesel with 0.1% sulfur content, no sulfur oxides and no soot particles are emitted. Nitrogen oxide emissions will be reduced by up to 80% and carbon dioxide emissions by 30%.

All AIDA ships put into service in 2007 or later are prepared for the use of shore power.

Experts are eager to see if the LNG barge project materializes as planned, and if it is also economically viable in the long term. One question is how the barge can be deployed in times with no cruise ships in port.