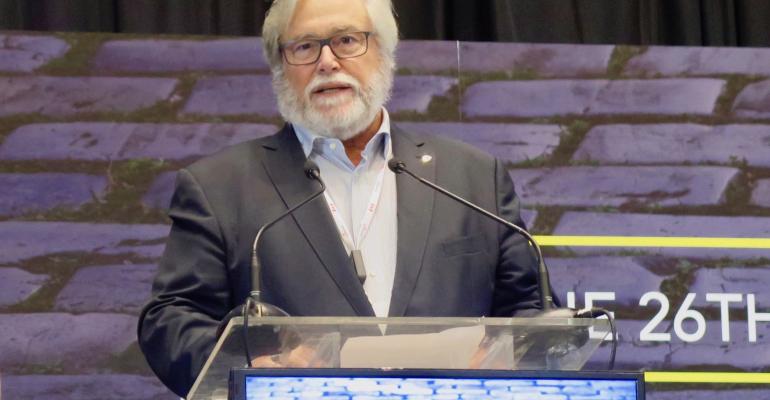 ‘I expect we’ll be able to get LNG in virtually every [North American] homeport we operate in,’ Micky Arison told the FCCA Conference this week in San Juan PHOTO: Anne Kalosh

Good news for the Caribbean

‘I expect we’ll be able to get LNG in virtually every [North American] homeport we operate in,’ Arison said during a 'Chair Talk' session at the Florida-Caribbean Cruise Association’s annual conference in Puerto Rico this week.

That was good news for the ports and destinations attending. Given the currently challenging LNG supply chain, there’s been concern about how deployment and itineraries could be impacted in the Caribbean and Latin America.

Some 22 LNG-powered ships are currently on order for a broad range of lines, including Caribbean stalwarts like Carnival, Royal Caribbean, Disney, MSC and Princess.

Carnival’s experience so far with the world’s first LNG-powered cruise ship, AIDAnova, has been very positive, even though it currently entails an expensive bunkering procedure.

Since AIDAnova entered service in Europe last January, it has operated on LNG 99% of the time, Arison said, ‘far better than we expected.’

But AIDAnova bunkers in Barcelona every week, via a barge Carnival charters from Rotterdam. ‘So it’s quite expensive,’ Arison said. Yet, as time goes on, with Carnival and others adding LNG ships, costs are expected to go down.

Carnival took a big risk in pioneering the cruise industry’s use of LNG. So far, so good.

‘I’m really proud of our group. LNG has proven so far to be really reliable,’ Arison said. ‘AIDAnova is doing really, really well.’

The next-to-be-delivered LNG ship, Costa Smeralda, to homeport in Savona, probably will bunker in Barcelona, as well.

As for Mardi Gras, which will make its home at Port Canaveral, Carnival has an agreement with Shell for bunkering by barge. And discussions are under way about how to bunker the next Excel-class ship, to be based at PortMiami starting in 2022.

The United States produces far more LNG than it currently uses, Arison said. In fact, the LNG that’s sourced in Rotterdam for AIDAnova’s Barcelona bunkdering actually originates in the US.

Royal Caribbean’s Icon-class ships and MSC Cruises’ World class will use LNG. Royal Caribbean hasn’t identified its homeport or deployment, but MSC is building a two-berth terminal at PortMiami able to handle its World-class giants.

MSC Cruises Executive Chairman Pierfranceso Vago told the FCCA audience that when it comes to addressing environmental impact, ‘The cruise industry is spearheading the maritime industry in an incredible way’ through a host of innovative technologies like fuel cells and initiatives including LNG.

‘We plan ships five years ahead that will amortized for 30 years. We design for the future,’ Vago said.

Goldstein:  'A clear improvement' in sustainability

Royal Caribbean Vice Chairman Adam Goldstein noted LNG is a ‘clear improvement in our sustainability profile’ since it addresses carbon dioxide, sulfur oxides, nitrogen oxide and particulate matter. This will help meet the International Maritime Organization’s commitment to reduce harmful emissions by 40% from 2008 to 2030.

Shipbuilders and suppliers indicate that beyond 2030, LNG will still play a role as other solutions develop.

‘We’re probably looking at LNG as an essential characteristic of sustainability for several decades to come,’ Goldstein said.