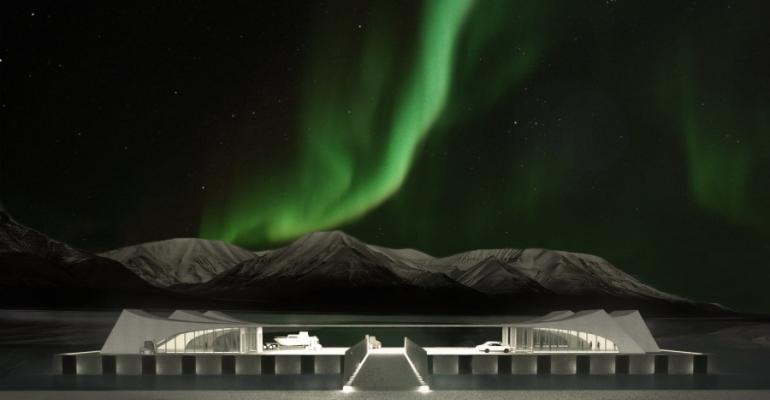 The new terminal is designed to withstand and operate in a port with solid ice as well as ice in motion
Svalbard’s main cruise port of Longyearbyen has commissioned plans for a new floating cruise terminal designed by world-renowned Norwegian architects Snøhetta, famous for Oslo’s new Opera House and the New Library of Alexandria, amongst other iconic buildings.

The facility,  measuring 120mtr by 35mtr with a height of 9mtr, features two storeys within the pier and another floor located under the waterline for storage and a marine research laboratory, Kjetil Bråten, port direct of Longyearbean Harbour told Seatrade Insider.

‘Also unique about the terminal’,  Bråten disclosed, ‘is it is designed to withstand and operate in a port with solid ice as well as ice in motion.’

Ships of between 260-280mtr in length will be able to tie alongside the terminal under favourable weather conditions, but the final calculations are not finished yet, Bråten remarked.

If the port authority receives funding in the 2016 state budget the terminal would be ready to use for the 2017 season, he estimates. Although not drawn on the funding required for the floating structure, Bråten confirmed it is less of an investment compared to a land-based terminal.

Atop the floating pier will be two buildings of  more than 2,000 cu mtr – one will house the port offices and loading area with access to spaces below deck, the other one for passengers and research.

The area for tourists features a lounge and cafe for cruise passengers and a viewing area overlooking the interior of the terminal to see scientists at work in the lab.

‘We are also planning a 100 plus seater theatre for lectures in the floating structure and there will be underwater access for ROV’s and divers.’

Last year Longyearbean received calls for around 36 cruise ships and 250 expedition vessels. In 2015, the number of call is projected to decrease to 26 cruise ships however MSC Spelndida will make two visits so the number of passengers and the size of the ship will compensate for some of the loss of others, commented Bråten.